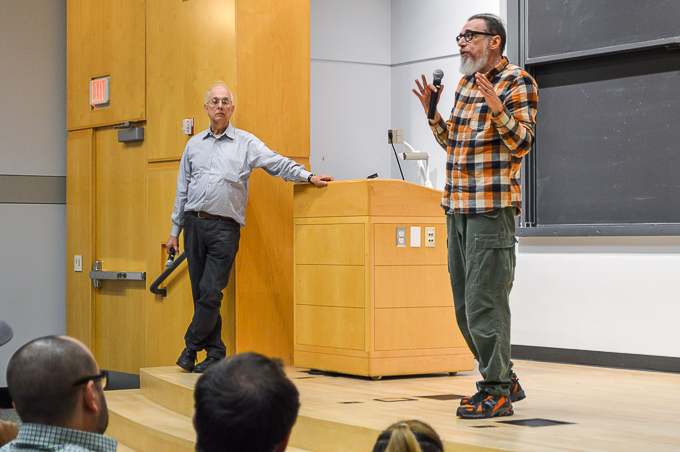 Friday evening, director, writer, and producer Larry Charles, famous for Borat and Seinfeld, spoke at the Boston University Photonics Center to share the thought process that goes into comedy films and TV shows.

“An Evening With Larry Charles” was the first event in the Fall 2016 BU Cinemathèque, a series of conversations with creators of original film and television programs.

Dr. Gerald Peary, curator of the BU Cinemathèque, was quoted in the BU Quad in 2011 saying, “students don’t know what they want to watch. I know what they need to watch” as a reason for Cinemathèque. The event calls students to watch, listen, and absorb the thought process of the greats.

“I watched Seinfeld and Curb Your Enthusiasm, and I know that Larry Charles is involved in both, so I thought it would be super cool to hear him speak,” said Yasmine Jama (COM ’20).

The audience spent most of the night watching a few of his most popular shows, starting with Charles’ first produced Seinfeld episode. The audience laughed in unison during familiar parts as though it was their first time watching the series. This was followed by an episode of Curb Your Enthusiasm, a show returning for its ninth season on HBO after a six-year hiatus.

Charles brought up the difference between the two shows after watching them.

Ryan Peña (COM ’19) appreciated Charles’ window into showbiz and said, “he gave an interesting view of the comedy show business.”

The evening did not only draw the attention of COM students. Karen An (CGS ’20) said that she learned about this event from Jama (COM ’20). A big fan of Seinfeld, An heard about Charles doing some sort of project with Kanye West and thought it was cool.

Charles unveiled an original pilot for the show about Kanye West. West wanted to make a show similar to Curb Your Enthusiasm. Some of West’s eccentricities, such as his phobia of bad breath, as well as stories from West’s personal life appeared in the episode. It was a documentary-like portrayal of West’s life at that time – “pre-Kardashians.” Charles mentioned how he first met Kanye and quoted what West told him: “I’m the black Larry David.” The original title of the pilot for the West show was Slightly Inappropriate. Even though Charles thought it was “interesting, fascinating, and funny” for a good first show idea, HBO did not agree.

Charles said that he was “attracted to transgressive type of art.” He likes people who break the rules and deconstruct the form whether it be in painting, poetry, novels, television, or films. He doesn’t want to necessarily give the audience what they want but rather challenge them. He is drawn to the idea of breaking things down, examining, and exposing the process.

“I’m absolutely interested in showing you the tricks a little bit,” Charles said.

With regard to comedy, Charles said that there is an angle into almost any subject that can be funny as long as one does not exploit the subject itself.

“The formula for me is taking subjects that essentially would not be really considered funny and try to find humor in them,” Charles said. “It is an artistic pursuit because it forces you to keep pushing and figuring out what that boundary is.”

View all posts by Prithvi Tikhe →