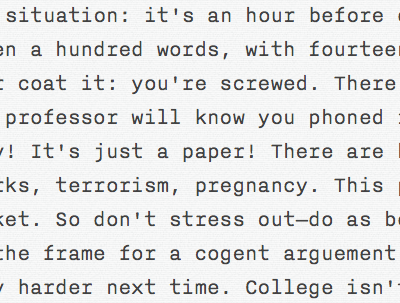 The deadlines that precede the end of the semster are rushing towards us at the speed of passenger trains. Unfortunately, there are many who haven’t finished—or started—their final papers. Maybe they’re a freshman still figuring out a work-flow, or maybe they’re a senior who just doesn’t give a damn. The train is coming fast; either brace for impact or get out of its way.

These deadlines don’t have be suicide. A little focus goes a long way and a concentrated effort can knock out a simple essay in just a few hours, regardless of length. But simply staring at a blank page can be intimidating enough, I know. I just knocked out my last term paper and thought I’d pass on some of the tips and tricks I learned during the process.

You got assigned a fifteen page paper on East Asian Democracy in the Globalized Hypersphere? That sucks. It might seem like there’s not enough material to fill one page, let alone the rest. Don’t worry, just break it down! Take that fifteen pager and break it down into three papers only five pages long, like the ones you used to write for high school English. Turn each argument into its own essay, then glue them together with transitions at the end. Then go drink.

It’s easy to get lost when working on a computer. The siren song of social media steals your focus and redirects it towards wall posts and retweets. It’s time to treat Facebook like the geeky kid who asked you to slow dance at the middle school formal: reject it! Slam down that laptop lid and escape from the screen—but not before first printing out your paper. Having space to think beyond a 13″ screen really helps. Cut up your paper, rearrange it, hang it on your wall; sometimes seeing it differently is enough to spark new ideas. Plus, that print quota isn’t going to spend itself.

Before you start writing, just slam on your keyboard, filling a whole page with nonsense. Here, I’ll give you a head start:

Don’t understand? Let me clue you in: nothing else you write will be anywhere near that bad. Once the pressure’s off, just start writing and don’t worry about perfection. That’s why editing exists, dummy.

Here’s the situation: it’s an hour before deadline and you’ve only written a hundred words, with fourteen hundred left. I won’t sugar coat it: you’re screwed. There’s no way it’ll be good, and your professor will know you phoned it in big time. But don’t worry! It’s just a paper! There are bigger things to worry about: sharks, terrorism, pregnancy. This paper is just a drop in the bucket. So don’t stress out—do as best as you can, construct the frame for a cogent arguement, and hand it in. But really, try harder next time. College isn’t free, you know.

3 Comments on “How To: Write a Paper on an Impossible Deadline”