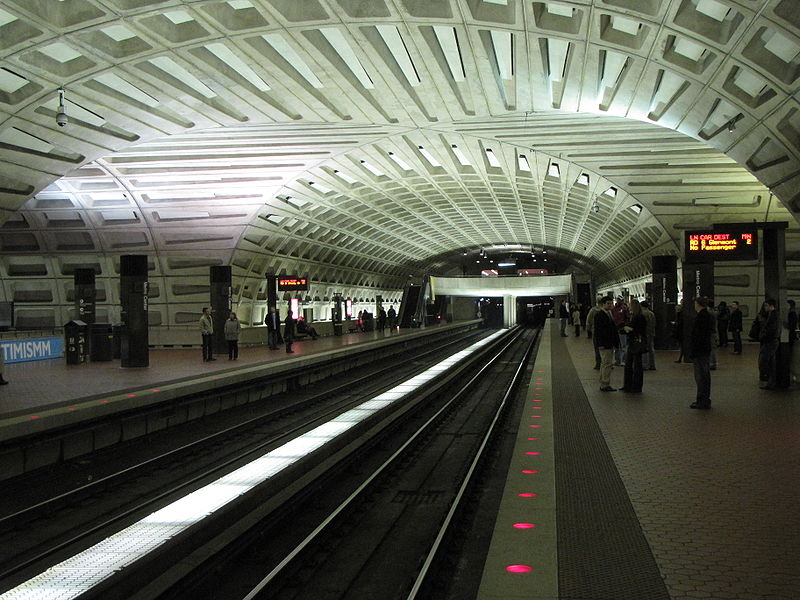 Washington D.C.’s underground rail service, known as the Metro or the WMATA, is much harder to figure out than Boston’s own familiar T. It also makes things more interesting.

The confusion begins with the fares. In Boston, no matter how far a passenger rides, the fare is the same. The Washington Metro counts the distance traveled. As a passenger rides farther, a higher rate is charged. That means if a passenger takes the Metro into the territories of Maryland or Virginia, travel can be costly. The maximum fare– 5 dollars– is as expensive as a commuter rail ticket in Massachusetts. Moreover, short distances are not exactly cheap — the minimum fare is 1.95.

To add another layer of complexity, an extra charge is added onto the fare if one travels in “rush hour.” This extra charge is possibly intended to reduce over-crowding on the trains. If so, it does not seem to be effective. In my experience, there have been a few times when the train was so full of people that getting on was impossible. It seems to me that this only happens on the T before and after Red Sox games.

As someone who once used a Charlie Card on a daily basis, I immediately tried to find the Metro equivalent. The Metro offers something similar– the SmartTrip. However, unlike Charlie Cards, SmartTrip cards are not free. The card itself costs five dollars, and travelers are required to put another five dollars on it at the time of purchase.

Here’s how it works. The person traveling must beep the SmartTrip twice, once when entering and again when exiting. For the person traveling, this has unappealing consequences. He or she may not have enough money to get out of the station. D.C. does offer safeguards to ensure this will not happen. It is possible to recharge a SmartTrip with cash upon exit or to incur a negative balance on the card. When a SmartTrip has negative value it can no longer be used to enter a station unless re-charged.

The differences between the T and the Metro may start with fares, but they certainly don’t end there. The DC Metro’s trains run faster and come more frequently than trains of the MBTA. The doors shut more quickly, which increases the chance of missing a train. Eating and drinking inside the Metro is strictly prohibited, unlike on the T. This results in clean stations and trains that are clearly a source of pride for the Metro. At some stations there are posters with the image of a enormous rat that remind passengers that if not for the no-food-or-drinks rule, the Metro would have the same infestation of rodents from which the underground rail systems of other cities suffer.

One feature of the D.C. Metro impressed me more than anything else. Escalators. The T’s lack of escalators is inconvenient, but for some, the Metro’s escalators are terrifying. These escalators’ chief characteristic is their unparalleled height. At one station, the escalator seemed at least ten times as large as a normal escalator that bridges the gap between one story and another. Furthermore, it is completely acceptable to push past those patiently waiting on the escalator in order to rush past them and leave the station quicker.

In the end, the Metro, with all of its (outrageously steep) ups and downs, is a reflection of the city it serves. A city where paying a little extra to get to a destination is worth it, where rules are observed, and where, sometimes, people get just a little pushy.

View all posts by Yi Wu →

2 Comments on “The Underground World of D.C. Metro”