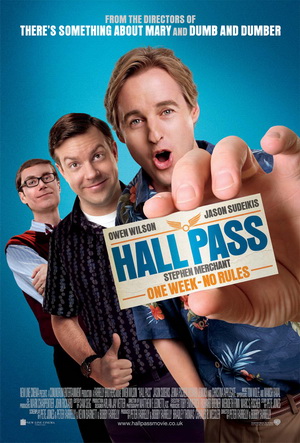 There was a time when the Farrelly Brothers were making movies like Dumb & Dumber, Kingpin and There’s Something About Mary, films that actually made you laugh so hard it might’ve been unhealthy. Unfortunately, that was well over a decade ago, and while their production since then has seen a few bright spots, they’re starting to look more and more like the guy on your couch at a party who just doesn’t leave even though the party is clearly over. And so here they still are, armed with their new film Hall Pass, which has the unfortunate distinction of having a truly great premise but still ending up as the worst film I’ve seen thus far in this young year.

Hall Pass concerns itself with two middle aged married men, Rick (Owen Wilson) and Fred (Jason Sudeikis), both plagued by that familiar male curse of wandering eyes and ‘what if’ thoughts whenever they catch a glimpse of another female. Eventually their wives, Maggie (Jenna Fischer) and Grace (Christina Applegate) get tired of their sex-obsessed minds and take drastic measures, offering each of them a hall pass: one week without any marital obligations for them to do whatever they want to do.

The idea here is that the guys will realize how unrealistic their fantasies are or get it all out of their system, and that each marriage will be stronger at the end. And so the wives head out of town, leaving Rich and Fred to complete the week that they’ve both dreamed of ever since they said their vows. The two men try to get back into the swing of picking up women (to disastrous effect), while the wives both realize that they too are free from their marriages, and start to have interesting experiences of their own.

This is a premise that seems tailor made for Farrelly greatness, because it provides them with a chance to do their usual absurd, gross out routines while still holding onto the sense of sweetness that made There’s Something About Mary a truly great comedy. Instead, they nail only pieces of the sweetness and completely miss the laughs on nearly every front.

Part of that has to be due to the fact that nobody here is acting well. Owen Wilson, who can be magic if he’s paired up with the right partner, never really finds the dynamic with Sudeikis that he had with Vince Vaughn, Ben Stiller or even Jackie Chan. His character is far too straight-faced, and Wilson ends up acting like a bad imitation of himself for most of the film.

The wives in the film, especially (and unfortunately) Jenna Fischer, are also wholly unconvincing. That they are rendered helpless by the script’s dialogue is unfortunate, but at times  they don’t even seem to be trying anymore. Sudeikis is the only one who’s mildly amusing, but it feels like he’s the only one bailing water out of a sinking ship. It’s an admirable effort, but it isn’t rescuing anyone.

Hall Pass also lacks the absurdity that made the Farrelly Brothers earlier movies so ridiculous. There’s no sheep-dog car from Dumb & Dumber, no cow that won’t die as in Me, Myself & Irene. Instead we get a movie that almost feels too safe, and when it does finally go insane in the last 20 minutes, it feels terribly out of place. There is no consistent tone to the picture, and so it never establishes a real comic groove with us.

Perhaps what Hall Pass needed was just a little more thought. There is a real idea here, a good one about why men are the way they are and how women should respond to it, but that idea is lost among the clutter and poor execution here. It’s never ridiculous enough to be dumb fun, but is certainly not smart enough to be highbrow, and so it lands in the sea of mediocrity between the two. If nothing else, the Farrelly Brothers can take some relief from the fact that however bad this film it, it isn’t their worst movie. They are, of course, responsible for Fever Pitch.

Hall Pass feels less like a comedy and more like a squandered opportunity for the Farrelly Brothers to return to form. An all around disappointment: D+

David Braga is a 2011 Film Student focusing on Film Studies and Screenwriting. In no particular order, his favorite films are: Trainspotting, Aliens, Breaking the Waves, School of Rock, Kill Bill, 2001, and Wayne's World 2.

View all posts by David Braga →