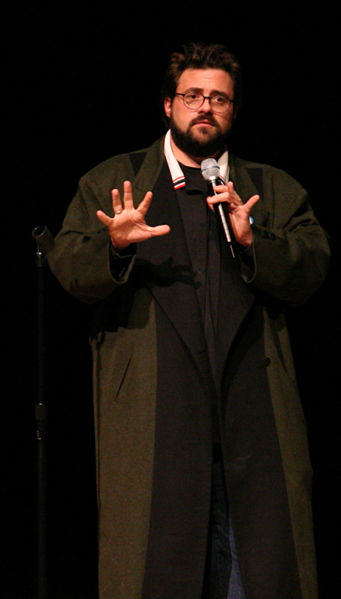 I  usually feel a twinge of guilt when I say that in public. Kevin Smith is the director, writer, editor, and star of many cult films. The king of the geeks broke out with Clerks in 1994, and apart from a few misses, Smith rode a decent wave of success that won the hearts of geek and cult culture across the globe. His Jay and Silent Bob characters have their own comic book, and currently his podcast is the most popular one on iTunes. The man can be considered a self-made success with just a glance at his Twitter following.

I went to see my hero this past December. The ticket price was $25. My boyfriend spotted me. We showed up early in order to get good aisle seats so I could see with no obstructions. Kevin Smith came onstage in a hockey jersey that read “Puck U” and did what he does best: bullshit with his fans. Several hours (and a few awkward fan questions) later, he promised his Boston fans he would be back in March with his latest film, Red State. The teaser trailer failed to play at the House of Blues, but the tantalizing setup worked. The secrecy surrounding Red State had devotees entranced.

In January, tickets went online for Smith’s big debut, at a whopping $76 a ticket. The reason behind the steep price hike? Kevin Smith has taken it upon himself to fight against the industry that produced and packaged him for seventeen years. At this year’s Sundance Film Festival, Smith gave a rambling speech on the need for indie directors to break away from the studio system and join him in independent distribution. At the end of his rant, Smith opened the bidding for his movie only to sell it to himself for the princely sum of $20.

Kevin Smith announced that Red State would be getting a potential wide release in October. The only confirmed markets are in LA and New York. Fans outside of those cities will have to play the waiting game, or shell out the big bucks to see him on tour.

As a fan in the lower end of income ranges, I could not come up with 70 to 80 some-odd dollars to see Smith again on March 6th as he premiered his self-promoted movie. To compare, that’s about 75 percent of what I used for groceries in the month of February. It’s a pretty big deal to drop that kind of money, Mr. Smith. I know you’re on a mission to thumb your nose at the studio suits, but who the hell is footing the bill here?

On his Twitter feed, he used Prince’s stunt of giving away his CD in the newspapers of the UK as justification to boost his reach and skew the industry’s numbers. But Prince gave his work away, while Smith is more than quadrupling the price of a regular movie ticket to boost his box office returns.

Actually, I’m a fan of Prince too. His struggle for artistic and financial freedom within the music industry is the stuff of legend. While he may have executed perfect self-distribution and marketing campaigns, he has occasionally wronged his fans. For instance, he used to charge fans for exclusive access to his website. Unless you subscribed, you could not access the Internet presence of Prince. This creates two kinds of devoted fans, the “haves” and the “have-nots.” Perhaps unintentionally, Kevin Smith did the same thing by charging an obscene amount of money for his new movie in order to prove a point. This fan stayed home for the Red State premiere, pulling dinner together with leftover cheese and tortillas.

Getting back at the bastards that swindled and insulted you is vengeance, maybe even justified vengeance. But calling on your loyal base of fans to empty their wallets so you can get bragging rights is exploitation. By cashing in on your “brand” like a marketing firm would, you’re no better than the studios you claim to despise.

4 Comments on “Kevin Smith and His Assault on Fandom”