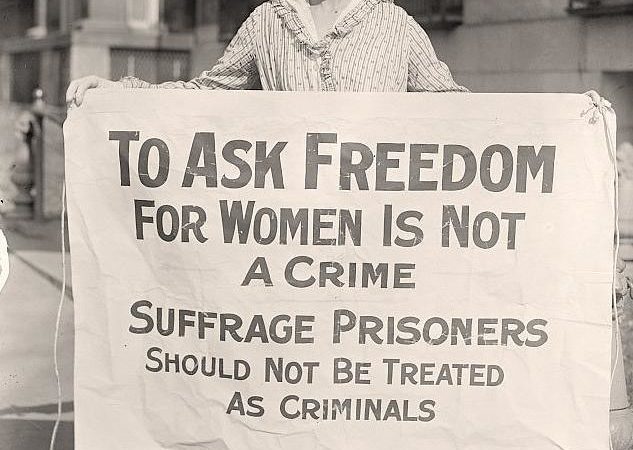 Rebecca Lenkiewicz’s “Her Naked Skin,” performed at the Boston Conservatory at Berklee the weekend of Feb. 20, is a luxuriously depressing look at women fighting for rights in 1913 Britain.

Lady Celia Cain (Dana Wilton, BFA ’21) is part of the women’s suffrage movement in the summer of 1913, along with Florence Boorman (Mina Kawahara, MFA ’21). When Celia lands in Holloway Prison for breaking windows, she meets Eve Douglas (Kate Fitzgerald, BFA ’23). They strike up a friendship that eventually grows into a romantic, yet chaotic, affair.

The play occasionally gives us glimpses into the men’s world as the audience views meetings in a private room of the House of Commons. The men disparage the women’s cause, as well as their humanity. The portrayal may be caricaturistic, but it certainly drives the point home.

Lenkiewicz’s script begins by explaining the overall suffragette movement at the time and later focuses on the intimate relationships between the cast, including Eve and Celia’s romance and Celia’s strained relationship with her husband William (Hunter Jonathan Cole, BFA ’21). “Her Naked Skin” also heavily dwells on the women’s decision to go on a hunger strike while in prison, against the doctor’s orders. This leads to several disturbing scenes throughout the second act.

This production, directed by guest artist A. Nora Long, was extremely well done. Kawahara and Cole were both stand-out performers alongside Fitzgerald and Wilton. All four actors had plenty of emotional scenery to chew through. Lenkiewicz considers whether working from a place of privilege is important when obtaining social equality.

Speaking of scenery, the Conservatory accomplished the variety of settings with a staircase, prison cells on the second story, and parlor scenes on the first level. The sound effects were also a highlight, showing just how confining Holloway could be with the hard clank of closing cell doors.