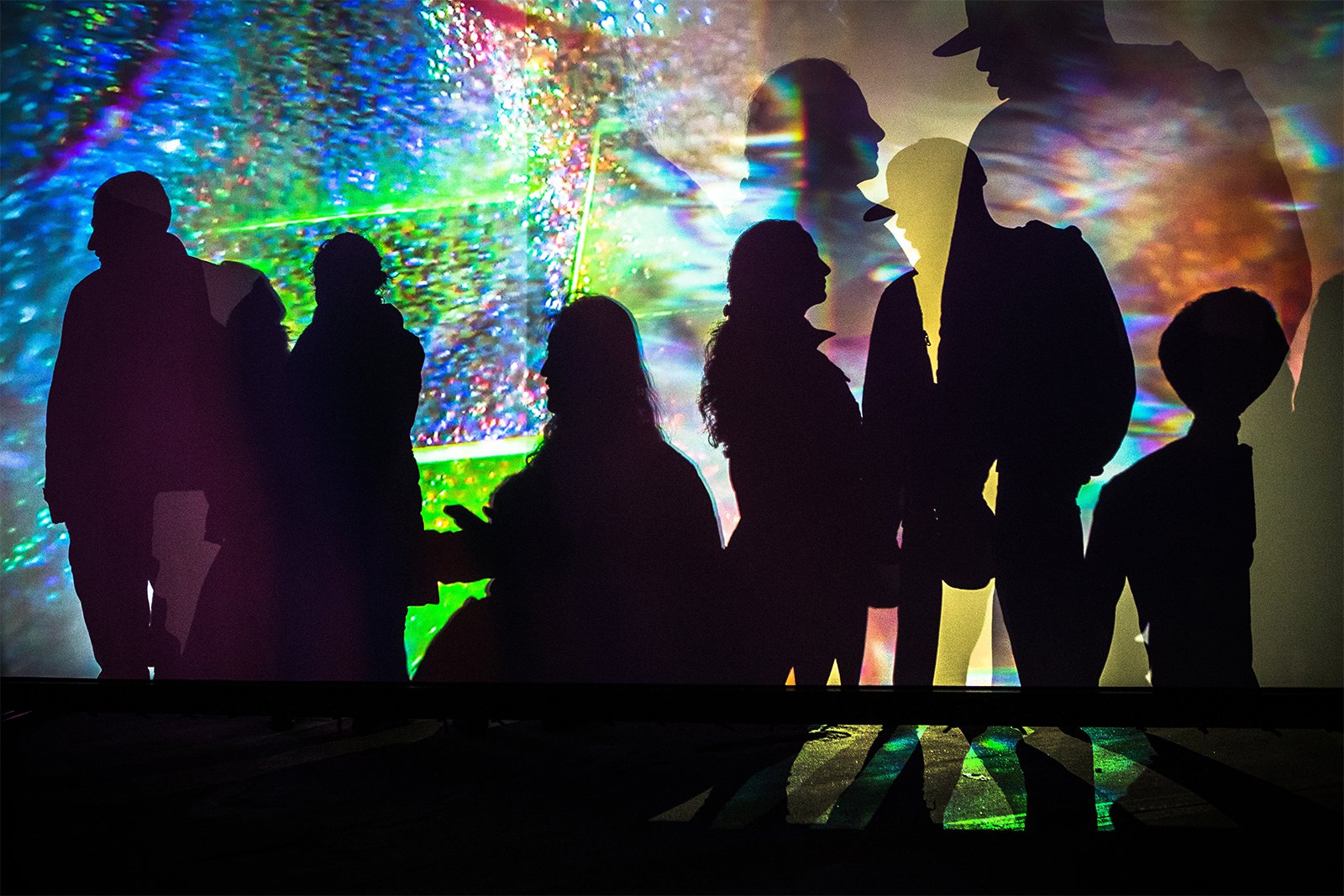 On Oct. 10 when the sun went down, Lansdowne street began to light up. Illuminus, a contemporary art festival which explored light through art, sound and performance, filled every corner of the venue. Music blasted from the street, projections lit up the walls of the surrounding buildings, art installations occupied the shops and parking lots, performers read poems and danced in bars. Everywhere one looked, there was something new and unique. All of the installations were distinctive but connected through a focus on light and the experiences that can be created with it.

The greater Boston area was filled with events celebrating the interconnectedness of art, science and technology during HUBweek, Oct. 3-10. Many events throughout the week explored topics ranging from medicine to communications to neuroscience–all unique and innovative–but the main highlight was the grand finale: Illuminus.

Many of the featured artists in the festival used projected light to express ideas and create new environments. One installation at the festival, “Life Source,” was made of fabric and hoops hanging from wires. When viewers walked inside they were transported to a whole new world. As projected green light shone through, illuminating the fabric, the Boston street faded away into darkness. The viewer saw only tubes of green fabric, draped down around them, isolating them from the outside world.

Another installation, a mix of visual art and performance, was called “Graffiti vs Projection.” Street artist Cedric Douglas spray-painted a white wall while computer generated motion-graphics, created by animator Kyle Brandse, were projected onto the spray-painted mural. The projected light lit up the eyes of the painted faces and created the illusion of light rising up from the mural making the figures come alive. The creators attempted to “explore and blur the lines of the raw physical and expressive nature of Graffiti and Street Art typography and ascetics in juxtaposition with motion video with projection mapping and performance art.”

Another shared feature of many of the installations was the use of the physical environment and architecture of the venue. Many projections fit perfectly into the shapes and structures on the surrounding buildings. “Waking the Monster,” a featured musical performance, turned the back side of the Green Monster, the three story wall of Fenway park bordering Lansdowne street, into a giant drum. Percussionists tethered to the wall played musical pieces by hitting the steal beams of the structure. Viewers watched from below as light, corresponding to the sounds of the musicians’ mallets hitting the beams, illuminated the wall. Glowing patterns spread across the wall and grew as the sound became louder and more intense.

What made the night even more fun was that a lot of the installations were extremely interactive. My favorite installation, “Between Doors,” consisted of several sets of free-standing doors. At each wall the participant would have to make a choice between doors holding opposite labels like “Past”, “Present” and “future” or “truth” and “fiction”  After walking through the entire series of doors, the viewer was confronted with a screen tracking all of the decisions made by themselves and all of the other participants in real time. The screen visualized the data in a pie chart, showing the connections between the the choices made and all of the people who made them. The installation not only made the participant think about themselves and their own choices but connected them to all of the people who walked through before them.

Illuminus, HUBweek’s closing celebration, made Lansdowne street come alive. The Projections that transformed the walls of the surrounding buildings and the music and sound that filled all of the spaces created a whole new environment. The collection of installations created an interactive multi-sensory experience that challenged the participant to open their mind, think about the world, and experience the moment.

For more information on Illuminus or the featured artists go to www.illuminusboston.org

Feature Photo: “Your Heart is a Prism” by Kevin Clancy, Photo by Aram Boghosian courtesy ILLUMINUS

View all posts by Michael Dratch →