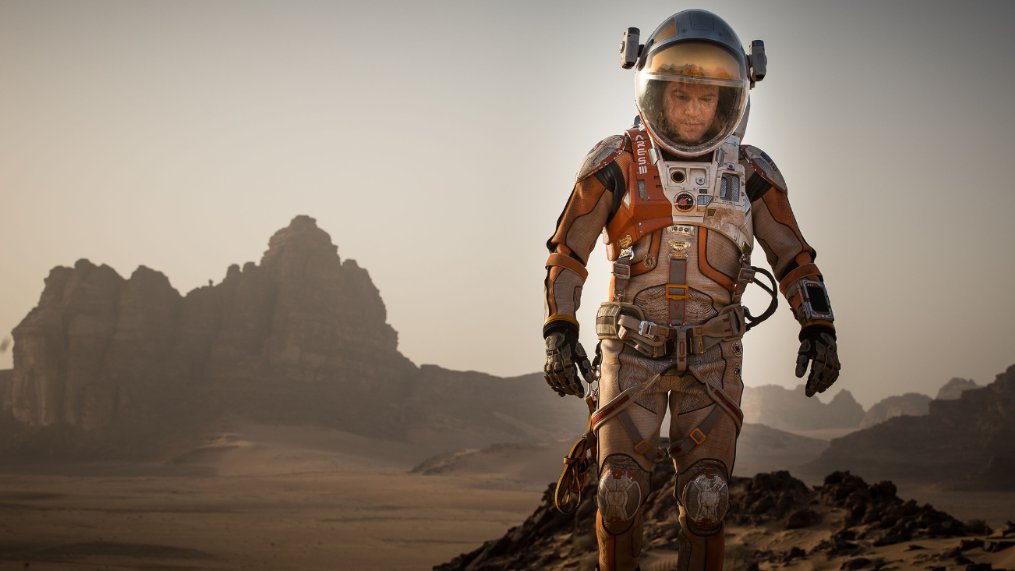 “Blade Runner” and “Alien” are two of the most essential science fictions of all time. “Blade Runner” with its dark, wet, neon-lit dystopia of a humanity that has grown strange and unfamiliar, and “Alien,” where the future is not shiny and digital but bleak and analogue. “The Martian” feels wholly at odds with the futures Ridley Scott envisioned all those years ago. It favors optimism over pessimism, progress over decay, and science over superstition. After a slew of flat movies, “The Martian” is Ridley Scott’s return to form, showing that he has more to say about our future than that it’s going to be a bummer.

Matt Damon plays Mark Watney, an astronaut who gets left behind on Mars while the rest of his crew thinks him dead and evacuates. Watney must find out how to contact NASA, keep the technology from breaking down, and create enough food to survive for 400 sols (Martian days).

It’s a star-studded cast, with Jeff Daniels channeling his “Newsroom” persona, Jessica Chastain as the stoic captain, and Chiwetel Ejiofor exasperatedly staring at computer screens and maps of Mars. The ensemble pushes the movie forward with more grace and humor than they have any right to when the conversation relies so heavily on engineering and rocket science jargon.

The Earth drama does begin to slow the pace a little by the end of the film, making the extended climax on Mars feel overly long, but Scott’s ability to turn the efforts of NASA into a multi-national race against time is both thrilling and inspiring. The late nights, extended overtime and caffeine fueled breakthroughs are part of a language the rest of us who are a little rusty on their rocket science can speak.

Matt Damon rises to the challenge of acting against nothing but a GoPro, some Martian potato plants, and a massive discography of crappy disco music. For the vast majority of the movie he’s never with another human. In the beginning, one can see the darker, more typical Ridley Scott movie. A stranded astronaut finds that scientific knowledge makes for ill company in total isolation, and slowly begins to unravel. But that never comes close to happening. Whenever something goes horribly wrong, Watney does get emotional, but then he’s always ready to fix it. Run out of rations? Become the first person to grow plants on Mars. Hole blown in your airlock? Put a big tarp and a hell of a lot of duct tape over it. Actually, just keep the duct tape close, it’s so perfect not even NASA could fix it.

“The Martian” almost feels like something from the mind of BU’s Isaac Asimov, one of the most prolific science fiction authors of the twentieth century. The future is not full of aliens, desolation and a humanity bereft of a soul. It revels in the common good that science can do for mankind. “The Martian” never strays from these ideas; when Watney drives through the distant landscape of soaring cliffs and burnt orange valleys, he doesn’t long for water and green grass, he jams out to some disco. When he nears the end of his journey, his reflections of his long held solitude remain wondrous, choosing to focus on the fact that he has been the first person to do so many things, rather than wallow with the cards he was dealt. It can be easy in today’s pop culture climate of ruined futures to think creatively and hopefully about our place in the universe. After watching “The Martian,” I found myself returning to a few worn paperbacks, pages yellowed and covers torn, written by a professor of biochemistry in the middle of the century who was bold enough to imagine the future, and our place in it, optimistically.

“The Martian” is many things. It’s a formal break from a director revered for his classic depictions of a future dark and cold. It’s a throwback to a style of science fiction pioneered by one of BU’s seldom celebrated professors. Most of all, however, it is a reminder of why we keep flying.