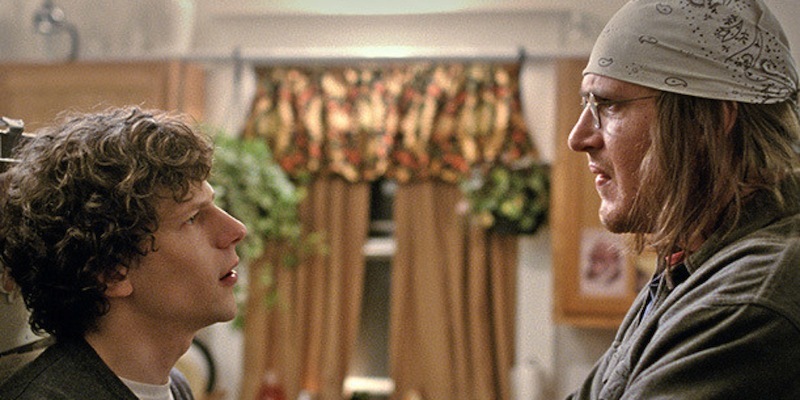 I should begin by providing the following disclaimer: as a longtime fan of David Foster Wallace’s writing, I felt highly ambivalent throughout my viewing of “The End of the Tour,” the recent cinematic rendition of journalist David Lipsky’s book about his five-day-long interview with author Wallace.

This is not to say that I didn’t enjoy the film, because I did. However, insofar as it purports to be “about” Wallace – a biopic of sorts – it largely fails. Where it succeeds is in its examination of the complex, bizarrely intimate relationship that developed between the alternately enamored and envious journalist, Lipsky, and his illustrious subject. The problem is merely that the movie is supposed to be about Wallace, when it is in fact a much more accurate and compelling narrative about the journalist-subject dynamic. And the shortcoming vis-à-vis this former topic is that the film has that icky, implicit subtext about the tortured artist (Wallace, that is), fated, as many who would go to the film know in advance, to kill himself.

Like most narratives that involve this undercurrent, it couldn’t seem to abandon the romantic air that is so easy to exploit in tragedies of this sort. If it has anything to do with Wallace, indeed, it has nothing authentic to say about him or his work, and everything to whisper about the circumstances of his death. And this is both angering and very sad.

The film is based on journalist David Lipsky’s Although of Course You End Up Becoming Yourself, the book he wrote about the five days he spent interviewing Wallace in 1996 during Wallace’s book tour for his epic novel Infinite Jest. Lipsky’s book is comprised of both Lipsky’s own reflections on the time he spent with the author and transcriptions of his interview recordings.

The movie’s protagonists are Lipsky and Wallace, and it takes place during this five-day-long interview, with fictional embellishments interspersed throughout. Lipsky’s character is played somewhat clumsily by Jesse Eisenberg, who regularly sheds a tear or two when it seems as though the actor does not quite know how else to infuse a complex scene with a little emotional gravitas. He also frequently furrows his brow during similar instances. This is distracting, as some of the film’s stronger scenes are those in which Wallace delivers rare moments of largely unsolicited intimacy, and it is the poignancy of these moments from which Eisenberg-as-Lipsky’s tearful befuddlement detracts. Still, this journalist-subject tête-à-tête remains at the movie’s fore.

The previously comedic Jason Segal plays Wallace surprisingly well, if not altogether elegantly. Lipsky, an author himself, is presented as simultaneously envious of Wallace’s literary success and genuinely respectful of Wallace’s work (and of Wallace himself). Wallace, in turn, at times skeptical of Lipsky’s agenda as a journalist, ultimately ends up liking Lipsky, and the two form a sort of intimate, mutually appreciative (if not entirely trusting) bond. During these compelling moments, the two become immersed in simply enjoying being in each other’s company, the seemingly forgotten tape of Lipsky’s recorder still spinning somewhere off-camera. This is the narrative the movie succeeds in delivering.

The film’s major shortcoming is simply that it claims to be a movie about David Foster Wallace. In contrast to Lipsky’s book, which nakedly presents itself as merely a microscopic sliver of Wallace’s “biographical” life, the movie positions Lipsky-the-journalist as some exclusive window through which Wallace can be seen as he was. However, it ultimately turns Wallace into a caricature of himself. It essentially takes all the bits of Wallace’s personality that shine through in his writing and purées them into a cartoonish rendition of “Wallace-the-Man.” Had the film kept the complex journalist-subject relationship as its central narrative, it would have made for a great movie. Unfortunately, it can’t seem to abandon the hackneyed, romanticized subtext about Wallace as the brilliant, tortured artist, and this is where the film falls short.

View all posts by Ana Kornblum-Laudi →