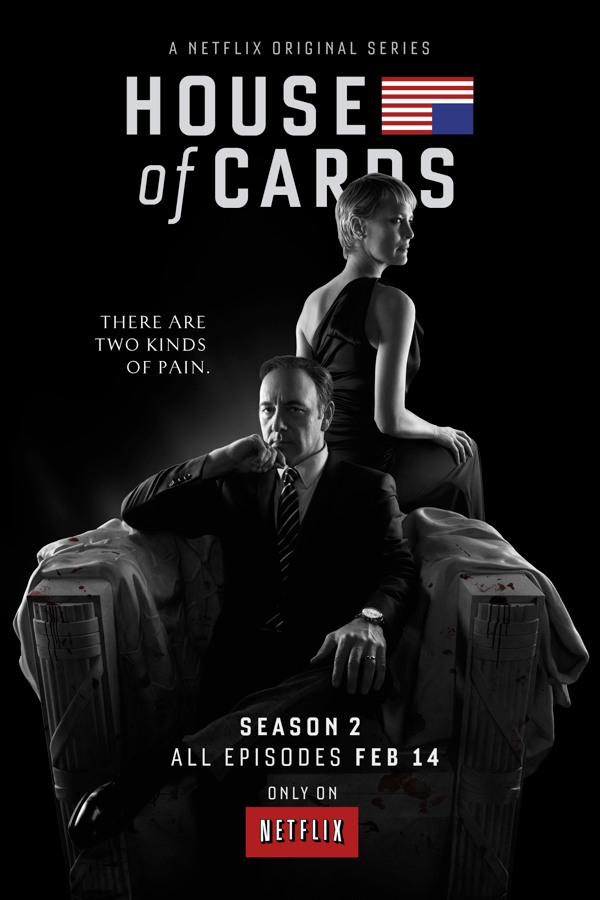 SPOILER WARNING for everyone who has not watched the entirety of Season 2 of House of Cards. You have been warned!

House of Cards is back, and that means your free time is gone. These thirteen episodes improved upon the first season in almost every way, giving us higher stakes and more interesting characters. The Underwood couple has returned to bring D.C. to its knees and further their own political might— whatever the cost.

House of Cards‘ biggest twist didn’t come in the penultimate or final episode, but in the very first episode of the season. When Frank pushed Zoe into the path of the oncoming subway I had to re-watch the scene, just to make sure it had actually happened. Zoe was easily one of the most important characters during the first season, and the decision to kill her off was bold. While shocking, it was in many ways the most realistic moves the writers had open. Zoe and her small squad of reporters had simply gotten too close to uncovering the Peter’s murder at the end of last season. By killing Zoe off, the show simultaneously allows for any serious investigation to be stopped and creates the motivation for Lucas to pursue the truth with intense purpose.

Kevin Spacey’s portrayal of Frank Underwood remains the most powerful reason to watch House of Cards. Spacey’s delivery of insanely quotable lines and menacing charisma gives the character the most magnetic personality of any character on the show. Despite the numerous times Frank breaks the fourth wall, his character remains largely an enigma. Chapter 18 showed Frank as a man who values his ancestry more than expected, and Chapter 24 confirmed and complicated Frank’s sexual orientation. He’s a character who only lets people know, including the viewers, exactly what he wants them to.

The breaking of the fourth wall adds to Frank’s grandeur since it turns us, passive observers, into his trusted confidantes to all of his schemes and machinations. When Frank turns to stare at the camera at the end of the first episode—after murdering Zoe—and simply says, “Did you think I’d forgotten you? Perhaps you hoped I had,” the viewer feels violated, intruded on, and unnerved. As a matter of fact, yes, I was hoping you had forgotten me and left me out of your schemes. When the fourth wall break so accurately addresses what the viewer is feeling, whether with a passing comment or a pointed glance mid-conversation, it creates a sense of unwanted closeness to Frank. We are made privy to all of his plans, a fly on the wall that he enjoys holding under his thumb.

The rest of the cast also turned out some stellar performances. Robin Wright’s Claire Underwood is perfect alongside Spacey, adding a little more of a human element to their cold and emotionless plans. While Frank has zero inhibitions about his methods in acquiring power, Claire has a more obvious sense of right and wrong. Her breakdown after talking to the First Lady on the phone illustrates this, as well as her activism against sexual assault. She provides an emotional link that just isn’t there with Frank, so much so that her moments of ruthlessness are all the more hard hitting.

Michael Kelly (Doug Stamper) and Rachel Brosnahan (Rachel Posner) also turned out effective performances that further complicated their characters. Stamper was shown to be more than just the loyal Chief of Staff to the VP chiefly through his interactions with Rachel. At times seeing her as a lover, others as a daughter, and sometimes even a mother, Stamper’s relationship with Rachel had turned into a weird mess by the end of the season. Doug’s death at the hands of Rachel, while probably well deserved, still felt a little sad. For all of his problems, he never really was a terrible guy, and he did care for Rachel.

For all of its commendable aspects, this season was not devoid of flaws. The set design for the numerous houses and apartments felt artificial. You could make an argument that it’s for thematic reasons, but that feels like a cop-out. I don’t buy that the two richest billionaires on the show, Tusk and Feng, just chose to live modest lifestyles in simple residences.

The other flaw is the lack of any real opposition to Frank and Claire. While it is fun to watch the Underwood regime backstab and crawl their way to the top, there just isn’t much tension in it. Frank is, without fail, the smartest person in the room. There isn’t a single character who feels as if they are a serious threat to him. Not Raymond Tusk for all of his money and propaganda, not even the President of the United States with the full might of his office behind him.

It felt like a pre-determined outcome from the very first episode that Frank was going to find himself behind the Resolute desk. The blundering efforts of billionaires and presidents weren’t fooling us for a second. Still, the entire last ten minutes of the season were superb. Watching Frank talk to generals, issue commands, and walk down an aisle of subordinates—all with opera playing in the background—filled me with dread. Frank, the bad guy, was the president of the United States. He had won. You can see the delight on Frank’s face as he looks over the Oval Office, a kid with a sweet tooth in the worlds greatest candy shop. The two raps of his knuckles on the Resolute desk was the perfect end to the season. Frank owns the U.S. government, not the other way around.