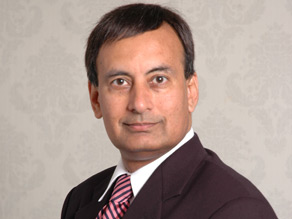 On September 25, the BBC reported that constant U.S. drone strikes on militant groups are traumatizing to everyday citizens. Four days prior, Pakistani protests against the American-produced and now-infamous “Innocence of Muslims” devolved into riots, leaving at least 15 dead. The history of American relations with Pakistan has always been shaky, and recently, resentment on both sides seems to be nearing its breaking point.

It was under this context that BU professor and former American ambassador to Pakistan Husain Haqqani took the stage Saturday, September 22, for the panel “A World in Flux: The Past and Future of U.S.-Pakistan Relations.”

Accompanying Haqqani was fellow International Relations professor Erik Goldstein, who briefly introduced his colleague by stressing the importance of diplomacy in the current political landscape. Haqqani began with two anecdotes that sounded straight out of a movie – one in which he was kidnapped and held hostage by his own government, and the other about his attempts to prevent war with India while on a romantic vacation with his wife. After some more brief personal history, Haqqani delved into the current state of relations between his current home, the U.S., and his native land, Pakistan.

Though there has been a security alliance between the two countries since 2004, Haqqani explained that a lack of common strategic interest fragmented the foundation of this relationship. The U.S. uses this alliance to keep tabs on neighboring Afghanistan and flush out terrorist groups and nuclear arsenals in the Middle East. All the while, Pakistan is concerned with potential warring with India. Yet many, Haqqani included, believe that the Pakistani government not only does not do enough to counteract terrorism but also aids covert terrorist groups in the country. This prolonged issue with terrorism has shaped the policies of both nations,  and so have two other major incidents.

The first incident includes the tracking down and subsequent killing of Osama bin Laden, who had been living comfortably in Pakistan for supposedly around five years. The U.S. suspected government involvement in hiding bin Laden, and yet Pakistanis were angered that the U.S. had carried out such an operation without the knowledge or consent of their government. Haqqani sympathized with the U.S. on this matter– if Pakistan had in fact been hiding bin Laden for this long, they might have also informed him of the raid, and subsequently would have compromised the mission. His theory was that the Pakistani government had not directly supported bin Laden, but did in fact aid several Islamist groups that assisted in bin Laden’s protection. Though the U.S. succeeded in eliminating a dangerous foe for both countries, these efforts nevertheless increased this tension.

The second event has come to be known as the Salala Incident. In November of 2011, NATO troops in Afghanistan came under fire from two Pakistani army outposts and the retaliatory airstrikes killed 24 Pakistani soldiers. In response, Pakistan tried to cut off entries to Afghanistan and put a stop to any covert U.S. operations in the country until a full apology was issued. Haqqani disagreed with the decision, stating that cutting off supply lines to Afghanistan would hurt not only Pakistan’s economy, but also its relationship with its allies. The blocking of supply lines until the arrival of Secretary of State Hillary Clinton’s apology in July also damaged NATO efforts to combat the Taliban, a common enemy for both countries.

Haqqani was brutally frank in discussing his home country. “Internally, Pakistan is a mess,” he said. “Islamists who can’t win elections can control national discourse.” The military ultimately prevents politicians from making any impactful changes, he argued. In a poll, more than 70% of Pakistani citizens claimed they disliked the U.S., despite having received over $24 billion in American aid since 2001. Even if politicians don’t share the belief, Haqqani says that it is more politically advantageous to claim opposition to the U.S.

Haqqani was equally critical of his current home. He believes the U.S. is guilty of repeatedly supporting rebel groups who do not represent American ideologies, and then renouncing these beliefs once they gain power. He attributes many of the reasons behind the current riots in the Arab world and the attacks in Libya to precisely this support, and stresses that these protests are more politically driven than religiously so.

“The world is not a world for America to fix,” he said. “It is a world for America to understand.” He remarked that the U.S. has yet to figure out “how to deal with somebody that’s not your friend, but pretends to be,” as Pakistan has. His ideal vision for this relationship is one of mutual economic, military, and diplomatic benefit. “Interest in Pakistan for Pakistan’s stake,” was the way he put it, while emphasizing that Pakistanis also have to cooperate with this vision as well. Both sides must put in the effort, he claimed, and both must lay out expectations for each other and work toward a common interest.

Though he expressed possibilities for maintaining good relations, Haqqani’s outlook was ultimately pessimistic; he believes this alliance is comparable to a bad marriage which ultimately ends in divorce. His biggest fear is an event-dictated relationship between the countries that might result in violence, although he sees this outcome as a distant possibility. Unless both sides renovate their agendas, the shaky alliance between the U.S. and Pakistan is in danger more than ever of collapsing, which would only prove consequential for the whole world.