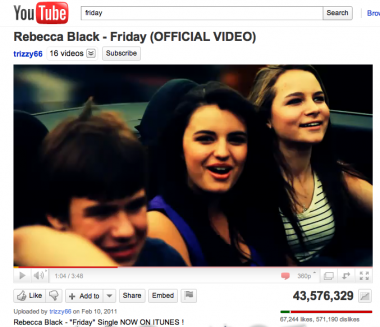 Rebecca Black is 13 years old, and her YouTube video has over 44 million views.

Most of those hits have accrued since the The Daily What posted the video on March 11. Since then, it has blown up all over the Internet and spread to television and news shows. She has already appeared on Good Morning America and The Tonight Show.

The fuss is about the music video for her song, “Friday,” a poppy, sugar-coated ode to the teenage glorification of the last day of school before weekend freedom. But Black has gathered fame for all the wrong reasons. Unlike recent online music videos from Eminem or Justin Beiber, which get hits from their geniune and sizable fanbases, Black’s attention has come from criticism and morbid curiosity.

The song is, by most respectable standards, terrible. “Friday” is repetitive and overproduced. Black’s singing leaves much to be desired, even with the generous help of auto-tune. The video features painfully awful graphics, green screen, and prepubescent dancing. And worst of all are the lyrics. Take this gem from the song’s bridge:

Yesterday was Thursday, Thursday/To-day it is Friday, Friday/

We gonna have a ball today/Tomorrow is Saturday/

The lyrics sound like the inane composition of a child much younger than Rebecca Black’s 13 years. But Black did not, in fact, write the song. The lyrics, and the song itself, are the product of ARK Music Factory, a Los-Angeles-based production company that writes songs and records music videos for aspiring young popstars. The pricetag — for Black’s parents, it was $2000 — covers the production of the song itself and an accompanying video. The middle-aged rapper who seems to be featured prominently in every ARK song is Patrice Wilson, one of ARK’s co-owners.

So the song is the artistic product of two adults. And there are plenty more music videos like Black’s on ARK Music Factory’s Youtube channel, covering topics from butterflies to celebrity life to jeans. Some are as bad as “Friday.” Some are infinitely worse.

But the Internet backlash has been less against ARK and more against Black herself. She has been a trending topic on Twitter for almost a week. There have been countless parodies and YouTube comments that border on threatening. On her Good Morning America interview, Black claimed one comment told her to “get an eating disorder” and to “cut and die.”

The comments section of YouTube, like the Internet itself, is a notoriously heartless place. Its sense of humor is somewhat exploitative, built on laughing at the failed moments of daredevils, or children trying to sing. The Internet, as a whole, will mock this impressionable 13-year-old girl without restraint. That sort of behavior has become commonplace in the digital age. Whether or not Black deserves this hate and ridicule is questionable, because although she’s the face of the video, she is not the full-grown man who wrote the words “gotta have my bowl/ gotta have cereal” and said they good.

But despite all the laughs at her, Rebecca Black will ultimately get the last laugh. According to calculations by Forbes, Black has already made at least $20,000 off  “Friday,” reportedly the same amount of money earned by viral-video rock band OK Go for their videos. Her exact deal with ARK will dictate how much of that money she will actually see, but Black said she plans to donate a sizable chunk of the profits she makes to school music programs and the relief efforts in Japan.

So although “Friday” might represent an unwashable stain on the music industry, and may have forever deconstructed the self-esteem of an impressionable young woman, some good will indeed come out of it. Is it too early to use “Friday” as a get-pumped-for-the-weekend jam and call it ironic?