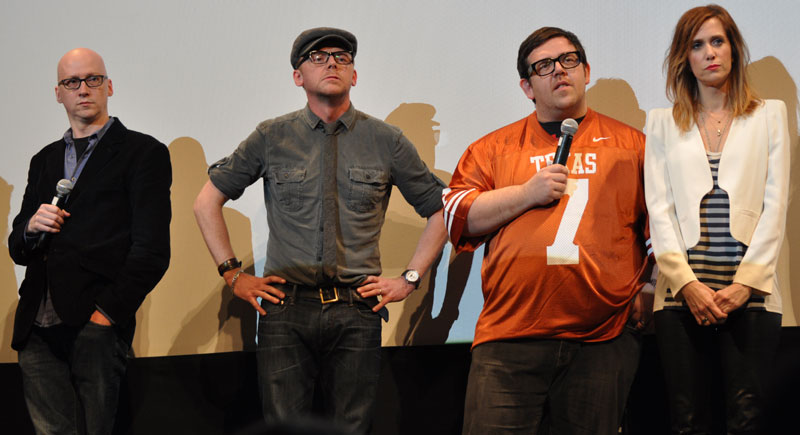 I’m trying to remember the last decent friendly alien movie. Was it all the way back with E.T.? Or does My Favorite Martian count?

Paul, the title of the new (friendly, almost too friendly) alien movie comes to the U.S.A. from the fanboy minds of Nick Frost and Simon Pegg. This time, the duo are devout comic book and sci-fi believers. I know, it’s a stretch of their persona, but it works and gets better. The neo-Laurel and Hardy combo decide on taking an alien sight-seeing tour of the Southwest after their pilgrimage to Comic Con, opening the proverbial Stargate for a slew of references throughout the film. Even Spielberg asked to be in the film, and his voice is heard asking the titular alien for ideas. This is best of on-screen British bromance, even going as far as jealousy when the other finds someone else to adore.The two joke about just how close they are to each other, occasionally fending off allegations of homosexuality. Between their British accents and perceived hand-holding, expect there to be misunderstanding and violence from outraged yokels.

But the poster clearly depicts Paul, an alien on the run from the Fed fuzz. I almost want to say its misplaced attention and should be given back to the leading men like their previous movies, Shaun of the Dead and Hot Fuzz. Paul finally shows almost twenty to thirty minutes into the movie, and plays sort of like a frat-boy Dennis the Menace. The voice belongs to none other than Seth Rogen, and it gives Paul the sort of unbridled cool factor of a pot-smoking, pants dropping, too-smart for his own good college punk. I can’t imagine what demographic they were trying to reach.

Love interest Kristin Wiig didn’t quite sell me on the crazy Christian Fundamentalist backwoods babe. There’s something about making religion the butt of jokes that doesn’t sit well with me. For instance, the only two reasons her religion comes into play is to make funny jokes about how she doesn’t know how to cuss (a running joke of the film) and for Paul, the friendly lax-bro alien to get in her face and tell her that her beliefs are wrong. After the initial shock of finding out everything she knew was wrong, Wiig’s character bounces up again like it’s no problem and is never mentioned again. Other than the not-quite dirty words she interjects, of course. Here’s my rule of thumb, if its a smart critique on the religion and can apply in other beliefs, then its a good joke (like the priest who blesses his golf clubs in Dogma). When it turns and makes fun of practitioners, then its offensive or poorly executed (all of The Love Guru). It’s just my take of the idea, but to each his own.

Back on the bright side of the moon, the geeky fan references had me anticipating the next hit. Practically almost every big-time alien movie is mentioned. To add even more fun, the supporting cast is equally as quirky. There’s Jane Lynch, out of her cheer track suit and in a kitschy alien-themed diner. Another dynamic duo in Bill Hader and Joe Lo Truglio play federal agents chasing for an untold suspect across the desert. There are other appearances, but I would hate to spoil the celeb-spotting fun.

Basically, if you enjoyed the previous Frost-Pegg collaborations, Paul is a surefire hit. It is the same lovable premise of best friends on an adventure with a twist of dealing with a slice of American culture. The references are spot-on and will keep any sci-fi fan’s attention. Paul, the wise ass alien, either fails or succeeds depending on how you handle the nonchalant attitude. The supporting cast buffers the storyline and keeps it going all the way to Roswell. This movie is fun, light entertainment with a decent portion of affection. Suck it, Mars needs Moms! A-