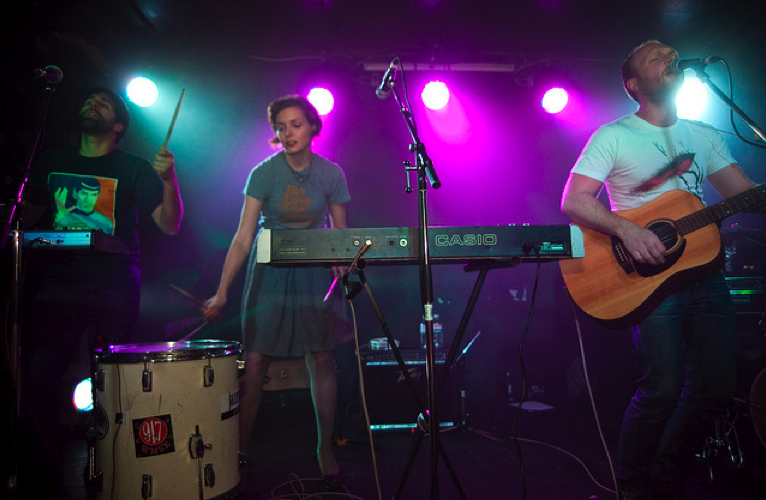 The Rural Alberta Advantage, a three-piece indie rock band based out of Toronto, kicked off their international tour by playing to an enthusiastic audience at the Middle East downstairs Wednesday (March 9th) night. They played a handful of songs from their new album, Departing, as well as crowd favorites like “Edmonton” and “Frank, AB” from their 2008 debut, Hometowns.

The Quad: I have to say, I’ve been to a bunch of shows here, and this is definitely one of the most engaged crowds I’ve seen.

Paul: The people who come to our shows are super nice.

It seems like your fans are really nice, for lack of a better word.

Nils: It’s funny ’cause some people are like, ‘oh, nice Canadians, do you get beat up by Americans when you go there?’ It’s like, oh, not most of the time, we have nice friends that come out, nice audience members. I guess we don’t court danger too well as a band. (Laughs).

Do you notice differences between touring in Canada versus touring in the US?

Paul: I wouldn’t say specific differences. For us, obviously, Alberta is kind of a thing, so there are differences with fans in Alberta. People are a bit more patriotic about the band. They tend to embrace the Alberta element of the songs.

Nils: It’s definitely like coming home in a way.

Paul: There’s certain cities where you get special crowds, like here. Both times we played [the Middle East] I wasn’t sure if it was going to be the same, but it was. Just this really energized crowd, which is the perfect way to start a tour, right? In San Francisco we get that same feeling, and in Canada there are certain cities like that too, so it’s pretty cool.

Paul: Even then, there’s cities you would never play in the states but you play in Canada because they’re big cities for Canada.

Do you have any really good or really bad stories from previous tours?

Nils: It was like The Amazing Race with no clues, and no one tries to guide you anywhere, and everyone is trying to get you to not find the car.

Do you feel like the internet played a role at all in your fan base?

Amy: Oh yes, it did play a big role in getting noticed by eMusic as a buzz band, and then going to South by Southwest, and Saddle Creek finding us there, and then getting signed. I think it’s true for many different kinds of bands. The internet is huge for getting out to the right people, and just more people.

Nils: One of the things from the internet we found was that, [the first tour] we would go to places where no one, in our mind, should have heard of us, and there was an audience there for us that we never expected to see. I think that was definitely from the word-of-mouth and people passing things around on the internet. It made it easier to tour places… you’re always trying to win everybody over, but it makes it a lot easier when there are some people there who know your stuff and wanna see you.

Amy: That’s what we were talking about, no matter where we go, even if it’s a super small crowd, there’s always a pocket, it could be two people, but they’re singing along, and that’s enough to be like, alright, let’s do this… Without the internet, that would have never, ever happened.

I get the vibe from your fans that they really care about your music. How do you want your music to affect people who hear it?

Paul: I mean, it’s awesome if it just affects people, you can’t ask for more. We’ve had people use us as their wedding song.

Amy: We’ve gotten videos that have made me actually cry when I watch it! It’s so meaningful when people are actually connecting to what we’re doing.

Nils: Music’s always been a huge part of my life, and it’s always been there for some very important moments, good and bad. So the fact that people choose our songs at times to capture a moment in their life, it means a huge deal. When I look back, I have certain songs that touch me in my life, and to think that regardless of how long we’ve been here doing this or whatever we do in the future, there’s always gonna be that memory that they have that you can never erase. So that makes it worthwhile to me.

“Hometowns” can be purchased on the RAA’s website or on iTunes.

3 Comments on “The Rural Alberta Advantage Discusses Canada, the Internet, and Their Inability to Court Danger”