By Caitlin Clancy and Rebecca Tarvin

As Valentine’s Day approaches, an old cliché comes to mind: Love is in the air. Yet what is seldom appreciated is that love is always in our genes, our chemistry, our evolutionary past, our very nature. This is true of many animal species, who appear to partake in some rather romantic engagements. Below are a few such cases, and the beautiful tactics employed to successfully seduce and sustain a partnership. 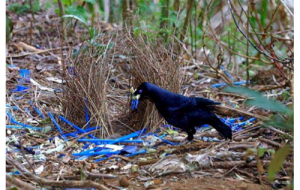 A male bowerbird begins to construct his display.

Take the Vogelkop Bowerbird (Amblyornis inornata) for instance, who is both a brilliant vocalist and architect. He lures a female to his impressively constructed bower with a ballad of imitated sounds that range from a cockatoo squawk to a whip crack. A bower is a large twig structure, perfected over the bird’s lifetime, that serves as a stage, display case, and, if successful, the nuptial bed. Typically, his bower is woven intricately, carpeted with moss, and then adorned with collected items that he hopes the female will fancy, such as colorful flowers, beetle shells, pebbles, seashells, bottle caps, and any other rare treasures he encounters. Additionally, these objects are color coordinated, then meticulously arranged for optimal visibility to the female. There is great pressure for creativity, as the males are highly competitive and often build within yards of each other. As the female tours each male’s area, he will continue to sing and dance until exhaustion. If she is pleased, she will enter his bower and they will mate– yet she flies off to nest and lay elsewhere (Diamond, 1986).

Unlike most reptilian species, the Shingleback blue-tongued skink (Tiliqua rugosa) is monogamous for life, forming loyal pairs for up to twenty years. The sweetest part about a male and female’s relationship is not so much how he initially woos her, but his consistent dedication and protection of her once they are pair bonded. During the breeding season, males pursue females by following chemical cues called pheromones, and then select her based on physical appearance. An inseparable courtship stage ensues for 6-8 weeks, followed by a 10 day mating window. Once mated, the female will gestate their young and raise them on her own, but across breeding seasons both will always reclaim one another (Bull et al., 1998). A male becomes very territorial and vigilant over his partner during this breeding season, readily fighting other males and predators that attempt to approach her (Bull and Pamela, 1998), and when beset by death, males are commonly found faithfully besides his dead mate for days, never leaving her side.

A pair of seahorses twirling around seagrass.

Every morning at dawn the male sea horse (genus Hippocampus) awaits its female companion amidst a forest of seagrass. When the female approaches, both individuals rush towards each other while morphing from a dull gray color to yellow or white.  Once they encounter each other, they swim side by side until wrapping both of their tails around a piece of grass and twirling around it.  Then both release the grass, slowly swim parallel along the sea floor, and grasp another piece of grass to spin around.  This action may be repeated multiple times until one sea horse dulls its coloration, ending the greeting.  Sea horses are monogamous for their entire lives, ignoring displays from other individuals, and repeating this romantic greeting with their partner each day of the mating season.  In addition, the male is even kind enough to take care of the eggs during their twenty-one days of development (Vincent and Sadler, 1995).  Yes, that in fact means that he becomes pregnant after the female transfers her eggs to his brooding pouch.  Now that’s dedication.

Finally, if you need some last-minute tips on how to dance yourself into your partner’s heart, check out how the blue-footed boobies (Sula nebouxii) do it.  Males present their bright blue/green feet to females, swaying back and forth to alternate which foot is exhibited.  Then they change position into an outstanding display, whistling and showing off their wings, feet, tail, and head. A female must choose a mate carefully, because it is his fitness and capability of giving parental care that will determine the eventual fate of her offspring.  Fortunately, the nutritional condition of the males is reflected by the color of his feet, so if a female has a sharp eye (which she does, for sky-dive fishing) she can accurately select herself a healthy partner (Velando et al. 2006).  Couples will remain together for at least one breeding season (Nelson 2005).

When is monogamy beneficial?  If parental care is necessary for offspring to survive, both parents must act together to care for their young.  When partners are scarce, it is beneficial to make life-long commitments, rather than one fleeting copulation that doesn’t guarantee another chance at reproductive success (Wittenberger, 1980).  Monogamy can possibly be explained scientifically, but how can we go about explaining what makes the skink sits by the side of its road-killed partner?  “Love,” its forms and practices have eluded science for years, and the rationale behind this strong emotion is still not fully understood. Several theories attempt to account for the subjective experience of love and its stages, and certainly many chemicals play a role– from sex hormones to neurochemicals like vassopressin, oxytocin, serotonin, and dopamine (Heindrichs and Dome, 2008). Moreover, activation of the brain’s reward circuitry (Aron et al, 2005) and stress system are involved as well, among others. Still, what is offered remains inadequate to fulfill love’s complexity, or to define what it really entails across species. So celebrate monogamy in our species while it lasts this Valentine’s Day.

Heinrichs, M. and Dome, G. 2008. Neuropeptides and social behavior: effects of oxytocin and vasopressin in humans. Progress in Brain Research 170: 337-350.

Wittenberger, J.F. and Tilson, R.L. 1980. The Evolution of Monogamy: Hypotheses and Evidence. Annual Review of Ecology and Systematics 11: 197-232

3 Comments on “It Isn’t Just Once a Year: Romantic Courtship in the Animal Kingdom”