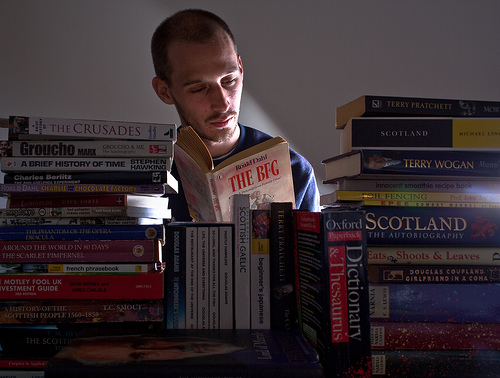 On a recent episode of the popular television show “How I Met Your Mother,” the protagonist, Ted Mosby, laments on the perils of the dating life. He says, “When you date someone, it’s like you’re taking one long course in who that person is, and then when you break up, all that stuff becomes useless. It’s the emotional equivalent of an English degree.” Not surprisingly, Ted’s words resonate with the broader, universal notion that the English major is not a practical degree to bring into the professional world. As Professor William Carroll, Chair of the English Department at Boston University notes, there is a “wide cultural joke about the dreamy, off-in-the-ivory-tower English majors who are lost in books.” Nevertheless, both Professor Carroll and Professor Charles Rzepka, who is the Director of Undergraduate Studies at the BU English Department, disagree with the common assumption that English majors lack the prospect of a bright future in the professional world.

On the contrary, both professors consider an education in literature as one of the most useful resources a student can acquire in college.

“In terms of operating in any kind of context where you have to deal with people on a day-to-day basis, or any situation in which clear, concise communication is essential, I can’t think of a better choice of a major than English,” says Professor Rzepka.

The English degree does not entrap the student within the world of academics, although teaching and graduate school are both common choices for English majors after college. Students with an English degree have the opportunity to pursue a career in a field in which they can apply the skills that the study of literature has given them. These fields include publishing, public relations, journalism, law, and even some administrative positions. Professor Carroll refers to the skills acquired in the English degree as “a certain kind of textual knowledge; [in the English major] you learn how to read the world…There’s a way of reading any kind of text—visual, written or oral—that you learn to do through the type of close reading analysis that we do in all of our courses.”

It might seem self-serving for these two distinguished English professors to praise their field of expertise. However, neither of them exalts the English major as the most appropriate or the most rewarding for everyone, and they are not afraid to admit that an English degree doesn’t often buy you a private jet. Still, they do acknowledge that an English major develops certain abilities indispensable to many professions.  According to Professor Carroll, a student of literature acquires “skills that maybe don’t lead you to the million-dollar job, but they are skills that transcend very specific kinds of tracks, and that are useful across all disciplines.” This is not to say that one can major in English and decide to practice as a computer technician upon graduation, but the degree certainly instills a foundation of analysis and interpretation that affords the student with a certain amount of flexibility when it comes to choosing a career.

Professor Carroll should know. When the now-professor applied to law school not too many years ago, the University of Chicago was more than eager to admit him for the skills he had acquired as an English major. Ultimately, though, he decided to settle for commercial flights and pursue his passion for literature in graduate school. Nevertheless, the professor’s experience demonstrates that an English degree is regarded as an asset in fields even outside the realm of academics and literature.

The law is a profession that is very much tied with the foundation of an English major, as Professor Rzepka notes: “a lot of law schools don’t want pre-law students…They need students who know how to interpret prose and who are aware of the fact that sentences can be construed and understood in more than one way.” This is the knowledge that an education in English instills in the student, and which therefore prepares him to be an effective and insightful lawyer.

Through their own experiences, as well as through the successes of their many former students, Professor Carroll and Professor Rzepka have demonstrated that the English major is not only fulfilling, but also a practical base to have in the professional world. However, even if it weren’t as functional and applicable a career as it is, there would probably still be many students who would choose to pursue the English degree simply because literature provides them with a kind of enjoyment and insight that not many other fields can offer. “There’s the fact that we read for pleasure, and pleasure is not trivial…there’s something satisfying in the literary experience that is different from other kinds of professional experiences, and if you can combine them, you have the best of both worlds,” says Professor Carroll.

Thus, Ted Mosby’s analogy between the development of intimacy in a relationship and the acquisition of an English degree is actually quite insightful. As Professor Rzepka notes, “The most important reason to be an English major is because you’re doing something that you like.” So although Ted is wrong about an English degree being useless (and also about relationships, but that’s a different story), he is right to compare the study of literature with the process of understanding someone you care about. Both of these experiences provide insight into how to interact within your environment, whether it be with your partner or with the challenges of the outside world.

Patricia Ball (CAS '11) is a literature writer for the Quad.

View all posts by Patricia Ball →