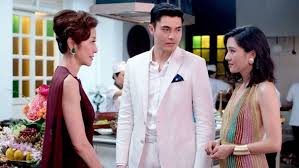 If you haven’t heard about Crazy Rich Asians, chances are you live under a rock. Crazy Rich Asians, directed by Jon M. Chu, has taken the cinema by storm. Since its release in mid-August the movie has made nearly $160 million at the box office. What makes this even more impressive, however, is that Crazy Rich Asians is a romantic comedy. Rom-coms are not the type of movie that people usually run out to see on the big screen. To understand the appeal and success of Crazy Rich Asians, we asked several BU students what they like and disliked about the film.

Hannah Boyce (QST ’20) said, “It was very visually appealing and it’s a very cute story line. I don’t think there’s much I didn’t like about it.” The plot of Crazy Rich Asians is quite simple. Rachel (Constance Wu) is a young and intelligent economics professor at NYU. Her boyfriend Nick Young (Henry Golding) invites her to spend spring break in Singapore with him to meet his family. Unbeknownst to Rachel, however, the Young family belongs to the top 1% of Singapore. Rachel finds herself thrown into the midst of the hubbub and excess of the extremely wealthy and must prove herself to Nick’s family, in particular his mother Eleanor (Michelle Yeoh).

Mollie Hersh (CAS ’21) said, “I really loved the female empowerment messages in the film.” Rachel and Eleanor are both forces to be reckoned with, yet are also polar opposites. Their conflict makes up the backbone of the story. In particular, rom-coms, along with melodramas, have historically been the genres that focus on the lives of women and it has been refreshing to see intelligent and capable women take action. Boston University Dr. Barbara Gottfried of the Women’s, Gender and Sexuality department said that in that regard, the characters and plot are reminiscent of Jane Austen’s Pride and Prejudice. Director Chu wasn’t interested in showing us the details of how Rachel and Nick meet and fall in love. Instead, Crazy Rich Asians is a story about class. The main conflict centers on whether the couple will succumb to familial pressure, or if they are strong enough to endure the hardships and obstacles. The relatively simple story line in fact allows Crazy Rich Asians to explore these themes more deeply and to invest more time in the subplots of the numerous side characters. It also allows for more time to bedazzle the audience with splendid parties and mouthwatering food. I’d go rewatch Crazy Rich Asians for the Singapore Street Market scene alone.

Rachel Jiang (CAS ’20) said, “The way the movie showed traditions and culture was so beautiful, a lot different than most movies I’ve seen where Asians are ‘the quirky token minority’ and that made my heart wicked happy.” Indeed, the most obvious fact about Crazy Rich Asians is that it is about Asian culture, in particular the Singapore elite. This is highly unusual for a Hollywood production, as historically most rom-coms (and blockbusters in general) center around white people in the U.S. People of color are typically reduced to playing supporting characters of the main stars. Crazy Rich Asians, however, features an all-Asian cast and was directed by an Asian-American, the first major Hollywood film to do so since Wayne Wang’s The Joy Luck Club from 1993. The sheer fun and sense of wonder that Rachel experiences is highly contagious and Chu celebrates a spectacular part of the world that was almost all but ignored in Hollywood cinema. More importantly Crazy Rich Asians veers away from stereotypes and corrects various misconceptions and prejudices against Asian culture.

Nancy Zhang (QST ’20) said, “I liked Crazy Rich Asians. It incorporated Asian values of family prioritization over individualism. But I’m not a fan of the British accents, because it feels like they were trying to westernize Asian people.” Whether the British accents were an attempt of Hollywood to appeal to the non-Asian audience is difficult to definitively say. The film explains the British accents by way of having the younger generation of the Young family grow up in England and attend the world’s elite colleges, as befits their social class. This is also where the main criticism of Crazy Rich Asians lies, however. Crazy Rich Asians focuses on the top 1% of Singapore, and ignores the many ethnicities and sub-cultures that make up the Singaporean population. There is a chance, however, that the sequel China Rich Girlfriend (which is already in pre-production) might pick up on that specific criticism.

The big question now asks what will follow the success of Crazy Rich Asians? There have been movies in the past with casts that were all-female (The Women), all-black (Black Panther) and all-Asian (Crouching Tiger, Hidden Dragon). Will Crazy Rich Asians be the one movie that will change Hollywood? Probably not. However, the immense success proves that audiences are definitely interested in diversity and are willing to pay money for it. Hollywood will always follow the money. The success of Crazy Rich Asians will hopefully be part of a larger trend that will pave the way to more diversity in Hollywood productions, both on the screen and behind the screen.

And meanwhile to pass the time until the sequels of Crazy Rich Asians arrive, here are some movie recommendations to quench your thirst for excess, fun and splendor.