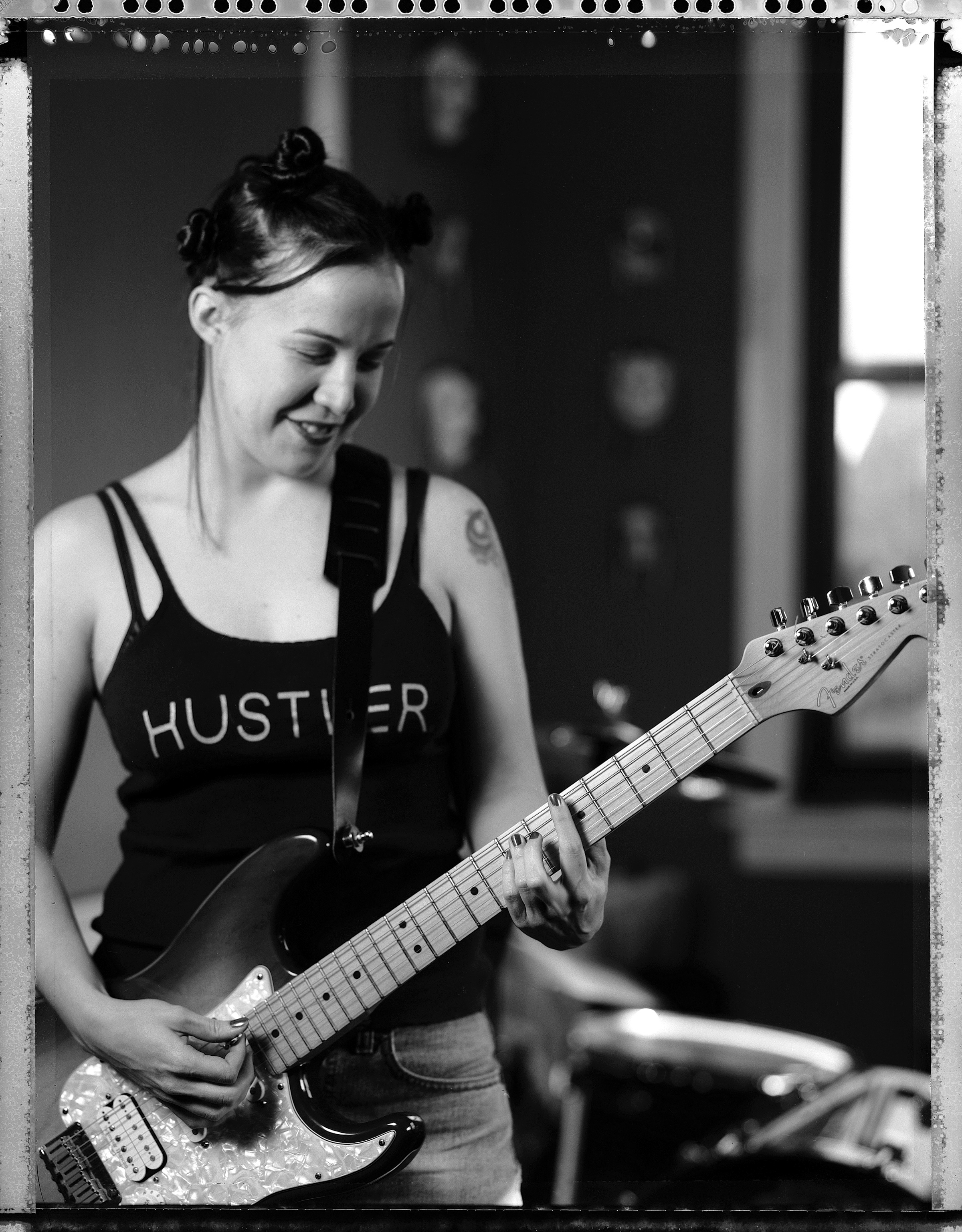 Boom! Wham! Pow! The ComiQuad , having (mostly) escaped the clutches of criminal mastermind “Senior Year,” has triumphantly returned! This time, it brings with it a new superpower: local artist spotlights!

The CQ’s second installment features Jennie Wood, a Boston-based writer and musician whose work includes Flutter, The Advocate-praised comic series about teenage Lily, “the girl who shape-shifts into a boy to get the girl,” contributions to New York Times best-selling FUBAR: Empire of the Rising Dead series, and A Boy Like Me, an upcoming novel about a transgender boy negotiating his way through school and a conservative hometown.

All images courtesy of Jennie Wood.

ComiQuad: Why do you write?

Jennie Wood: I write because I seriously cannot imagine doing anything else. And that’s the way it’s really always been. I also write because, if I go one day without writing, I know it. I start to go crazy and get moody. If I go two days, then my significant other Natalie knows it. If I go three days, the whole world knows it. I turn into the Hulk [laughs].

I write out of necessity, definitely.

How long have you been writing?

Pretty much for most of my life. I started writing in junior high school when I would just go home, rush through my homework, and start working on stories. And the stories would involve fictional versions of my friends. And I would just change their names and tweak them as characters, so none of them got mad at me, and I would write stories with them and take them to school and share them.

And the greatest thrill was walking by a classroom and seeing my friends reading my stories instead of listening to the teacher.

And that’s when I started thinking “Hey, I think I’m on to something here.” And from there, I just kept writing. Writing plays, writing stories, writing screenplays, and over time that evolved into comics and graphic novels and novels.

When did you first decide that you wanted to write in a professional capacity?

Again, I think that came out of necessity too. I just wasn’t content doing anything else. And I tried other things. Right after school, I had a band in Chicago and I was bartending. And I did some work for a publishing company, so I was around writers.

Whatever else I did, it just wasn’t as satisfying. So I started looking for writing jobs and luckily found one. I write non-fiction features and current events for a website called InfoPlease.com. Which is great, because I get to spend that time working on a different kind of writing. And then I get to spend my personal time working on fiction. And they feed each other and play off of each other quite nicely.

For how long have you been a musician?

I started playing piano when I was five years old because my mother wanted to be a concert pianist. And it was a dream she never fulfilled, so she wanted me to do it.

I would come home and practice the same song every night over and over until she would tell me to quit. That was my first way of rebelling. And when that got old for even me, I bought, with my allowance, a guitar from my cousin. At this point I was around twelve.

No longer out of rebellion?

No, it’s turned into something I love to do. It’s the only other thing besides writing where when I’m doing it, I don’t look at the clock. I don’t notice time passing.

What does “All In, Noise Out,” an expression on your website, mean?

That is a phrase that Sarah Pruski, who did my website, came up with. She came up with it with me in mind and just the way I work. The way I just dive into a project and stay focused and get it done, no matter what distractions. I just block all the “noise out” and get it done.

You write non-fiction, prose, comics, and songs, do you gravitate to any one in particular?

I find that it comes in waves. So right now I gravitate most to comics and that’s mainly what I’ve been doing the past couple of years, so I’m in that rhythm, that’s part of it. And I’m just enjoying it. I’m really, really enjoying it.

I’d like to do a couple projects going at the same time. Typically, I like one to be comics and one to be prose, but if I had to pick one that I’m gravitating more towards now, it’d be comics.

With Flutter and A Boy Like Me, you tend to gravitate towards LGBTQ themes. Why is that or why is that important for you to have in your work?

Because those issues mean a lot to me. On a personal level, but also on a wider, general level. I’m not transgender, but a lot of the transgender issues matter to me because I grew up not comfortable in my own skin and I know what that feels like.

I know what it feels like to be in the girls’ locker room and not feel comfortable in my own body being there. Feeling like a spy, feeling like I didn’t belong, and I can relate to that.

And I don’t like the discrimination that goes on towards transgenders, even from other minorities. And that really bothers me.

Like the Michigan Womyn’s Music Festival, where they don’t allow trans women in. That really, really bothers me.

I think whether it’s a main protagonist or a supporting character, LGBTQ characters and issues will probably always be in everything I do.

What are your goals and plans for the future?

Right now, I’m writing and recording some songs to go with it from the character point-of-view that my protagonist is in love with. I want to get those done too.

I’ve been really lucky. Since I’ve moved to Boston, I’ve found Grub Street, which is a writing center. That community is just immensely supportive. I’ve met a bunch of other writers who have become lifetime readers who read all of my work, and I read theirs and we give each other feedback. I meet some of them once a month, I’ve got a writer’s group that meets once a month.

I have a significant other who’s extremely supportive, which totally helps.

Even my friends, the non-writers don’t always understand why I can’t get together on a Saturday or a certain night during the week, but they’re still supportive.

Jon Christianson (COM/CAS '14) is the zany, misunderstood cousin of The Quad family. His superpowers include talking at the speed of light, tripping over walls, and defying ComiQuad deadlines with the greatest of ease. His lovely copyeditors don't appreciate that last one. If for some reason you hunger for more of his nonsense, follow him at @HonestlyJon on Twitter or contact him at jchristianson@buquad.com!

One Comment on “The ComiQuad: Local Spotlight on Jennie Wood”