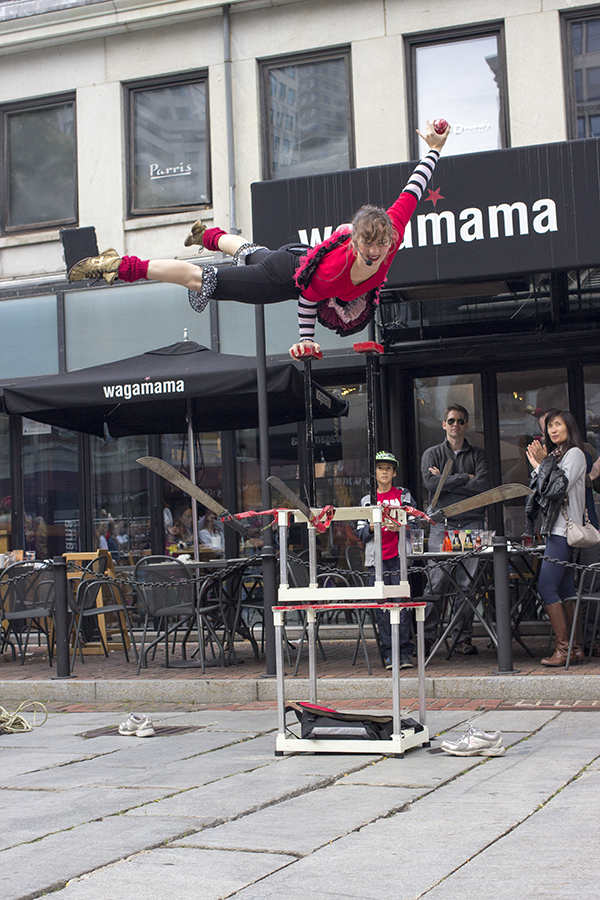 Crowds gathered on the walkways surrounding Quincy Market and Faneuil Hall this weekend to watch various street performers juggle, flip, and put their lives at risk for the dual-purpose of entertaining the audience and making their living. Street performers from all over the world auditioned for the chance to perform at Faneuil Hall during the 2013 Street Performer Fall Festival that lasted October 12-14.

A living statue gives words of wisdom to anyone who places a dollar into the cylinder near the statue. This street performer is part of TEN31 Productions.

Bob at Large balancing on cylinders.

Al climbed all over two volunteers in order to get to the top of a 12-foot pole he used in his act.

Al at the top of his 12-foot pole juggling five balls at once.

Wacky Chad balanced on an unnaturally tall unicycle while juggling a plunger, club, and sword.

Wacky Chad flipping off of a pogo stick.

Cate Great’s act is full of juggling, acrobatics, and danger. So naturally, she juggles sharp objects while balanced on a board and cylinders.

She incorporates the juggling part of her act by holding a juggling ball in her hand…while still balancing one-handed over five sharp knives.

This is John of the Yo-Yo Show. He is the World Yo-Yo Champion. The audience wanted to see him “Shoot for the Moon” while on the ground, so he did it.

The real star of the Yo-Yo Show was this volunteer, who wowed the audience with her one-legged, plate-spinning, hat-wearing yo-yo skills. Yo-Yo World Champion John was only there as her warm-up act (and to get the plate and yo-yo spinning and place the hat on her head. Technicalities.)

Katy is a senior in the College of Communication studying photojournalism. She doesn't know what she's doing with her life after graduation, all she really knows is that she loves taking photos, doing theater and playing with cute animals. If there is a job out there that requires those skills and little else, then that's for her. If you know of a job like that, email her! Or stalk her on Facebook! Or tweet at her! She's also on Instagram. She's everywhere (you can confirm that on foursquare.)

View all posts by Katy Meyer →