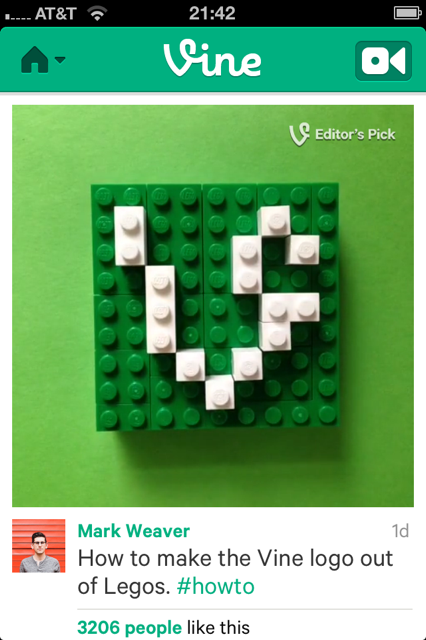 The social network Vine launched last Monday. Vine is an iOS (-only, for now) app that allows users to upload endlessly repeating, six-second long videos (Vines? Is what we’re calling them?) with an appeal straight out of “Being John Malkovich.” Nathan Jurgenson (@nathanjurgenson) wrote that Vine represents, “the kind of stuff that got postmodern theorists out of bed in the 1980’s: the implosion, the dromology, the disembedding and distanciation. The rise of the quick-cut music video itself being placed in random rotation on MTV seemed new, not just modern, but something ‘post.'”

Vine, owned by Twitter, is positioned as a competitor to Facebook’s Instagram. Twitter missed an earlier opportunity to aquire Instagram; they’ve been trying to make up for it ever since. In an attempt to leapfrog Instagram’s popularity and establish itself, Vine presents something of a social-media chimera. It apes Instagram’s presentation, with a timeline of little square boxes underscored by likes and comments, and fills it with a combination of Twitter’s brevity, YouTube’s “home video” aesthetic, and the GIF’s cheap entertainments.

In fact, the mutation of the GIF may be what pushes Vine past the obstacles other also-ran social networks have encountered. Vine is like an Instagram of GIFs, and everybody loves GIFs! GIFs have been called “the first artform of the Internet.” Then GIF Sound came along, but that idea was hardly new. But Vine took those noisy GIFs, made them social, and made it so anyone could put one up online, encouraging spur-of-the-moment creativity which usually produces fairly lackluster results but can, given the right conditions, produce something incredibly entertaining.

So the question is, with all of the attention it’s been getting, is Vine really worth the hype? In this writer’s opinion, yes. There is something truly mesmerizing about Vine. It takes Instagram’s ability to present life-being-lived but brings those captured moments to life themselves. It’s home videos for the Internet age. And thanks to the creators of Vinepeek, Vines (So, that is what we’re calling them!) can be sequenced, a new one played six seconds after the last, turning them into a demented television station for our ADD-addled generation. Vine has tapped into a previously unexplored vein and opened a well of human production that, at the very least, is fascinating to watch.