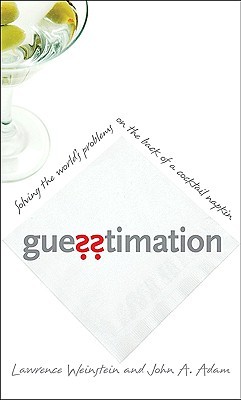 Guesstimation, by Lawrence Weinstein and John A. Adam, is a book that would make the perfect holiday gift for anyone who wants to better understand the quantitative world around them.

In life, as the authors explain, we are bombarded constantly with numerical information, which often is presented with terminology too difficult for the average person to mentally conceptualize. Commonly cited statistics such as The average American produces 100 cubic feet of garbage every year! or Nuclear power plants produce tons of high-level radio-active waste! exemplify the types of ubiquitous phrasing that are difficult for laypeople to imagine. While these statistics contain real and useful information, they remain ineffective until their units are comprehended in a meaningful way.

Thankfully, Weinstein and Adam wrote Guesstimation with the underlying belief that everyone has the ability to fully comprehend the world of quantitative information if approached in the right way. This ‘right way’ is a method that the authors attribute to Enrico Fermi, a physicist made famous for his impressively accurate estimations of seemingly impossible data (have you ever been asked how many piano tuners are in Boston? Thank Fermi for that.) He broke down the estimation process into small, manageable steps that only required basic knowledge to complete. Fermi then used their solutions as ‘stepping-stones’ towards solving a larger problem. Undertaking Fermi’s process of estimation, as detailed again and again in the dozens of examples the book contains, uncovers the relationship between quantitative data and the physical world, and exemplifies how we can apply it to our understanding of statistics from the everyday to the bizarre.

Weinstein and Adam dedicated an early chapter of their book to scientific notation and how its use simplifies algebra with large numbers. Because the book focuses largely on the ability to solve Fermi problems without aid (i.e., a calculator), and because so many of the estimations in the book deal with huge numbers, scientific notation is the logical format with which to manage the data; it requires only the application of algebra to single-digit exponents (“powers”) of base-10 numbers, instead of numbers in the billions, trillions, or larger. For instance, the number 100,000,000 is expressed in scientific notation as 10^8, the 8 denoting the number of zeroes which the ‘longhand’ version of the number contains. To multiply 10^8 by another 10^8, one must only add the exponents to produce the solution of 10^16 with very little effort at all.

The authors also dedicate a section of their book to the discussion of accuracy, and how the specificity of an estimative goal, combined with the confidence an estimator has in his figures, dictates how accurate answers must be. A scenario dealing with gas mileage details the absurdity of being overly accurate: If a car drives 327 miles with 23.0 mpg, the mileage would be calculated by dividing 327/23.0 to get 14.2173913…, etc. Weinstein and Adam explain that this answer is unnecessarily accurate since numbers in the equation are accurate only to a tenth, and not to one part in a billion. A more reasonable solution would be 14.2 mpg because the number stays within the realm of necessary information. In other words, .2 miles is a significant amount of extra mpg. In the same vein, being too inaccurate may yield an uninformative solution.

A large component of the Fermi method is the educated guess, which arguably is the foundation of any estimation (Hence the book’s title). The ability to make the educated guess determines how small the steps a Fermi problem need to be broken down.

Think about it this way: In one of the goofier problems from the book, taken from Section 3: General Questions, the duo attempts to estimate the amount of time it would take a running water faucet to fill the inverted dome of the US capitol building. This problem doesn’t elicit an easy rough estimate  (while, for example, estimating the distance between cities might)  because the situation is not one often encountered in daily life. Yet, the authors demonstrate that by guessing the dimensions of the problem in terms of smaller, more familiar situations that comprise it, a reasonable estimate easily can be produced.

To begin, they include the diameter of the dome and the amount of time required to fill a liter jug from a kitchen faucet (or flow rate in gallons from a showerhead, etc.). To guess the diameter of the dome, the authors rationalized that it must be greater than 10 m and less than 100 m, the length of a football field. They then took the geometric mean of these constraints, the square root of 10 x 100, to get 30 m. Note that the authors did not know off the top of their heads the diameter of the dome, but comparing it to their prior knowledge of other dimensions, in this case, the football field, they nonetheless produced a sound estimate. The same process was then applied to the flow rate; they estimated that a kitchen sink would fill a gallon jug in about 30 seconds—an activity familiar to most people—and applied that speed to the larger, unfamiliar scale.

In addition to estimates dealing with volume and time, the authors also tackled many problems involving energy. A particularly interesting problem in the book involved estimating the potential energy stored in the Alps, or, in other words, the hypothetical energy that could be extracted from flattening the range. To do so, estimates were made for the average height of the range , which is 2 x 10^3) (however, only half of this height will be used for the final calculation because the mass used will be calculated from sea level), its length and width are estimated at roughly 1000km and 200 km, respectively, and the average density of rock, 3 tons /m^3. Again, these figures are decided upon by comparing them to things with more familiar dimensions. The rock density is compared to the known densities of water and iron, and the dimensions of the range is comparison to the approximated area of the US they would cover. These figures were then used to uncover the range’s mass (1 x 10 ^18 kg), and finally its potential energy using the formula PEalps = (mass) (gravity) (height) = (1 x 10^18kg) x 1(0 m/s^2) x (1x 10^3m) = 1 x 10^22 J (which we’re told is about the PE of 10^17 cans of soda!).

When solving Fermi problems, what we’re actually experiencing is a forced familiarization with numerical units by conceptualizing them in terms of things we’re already familiar with. Our annual garbage consumption in hundreds of cubic feet can easily be represented by imagining a couple of living-room sized spaces, while our tons of nuclear-waste per year as a few car’s worth. Ultimately, reading Guesstimation should convince the reader that the ability to make quantitative estimations is extremely valuable in that it strengthens our understanding of numbers and deepens our relationship to the physical world.

Guesstimation is available online at Amazon.com. Thoughts and comments can be sent to Naomi at nspungen@buquad.com