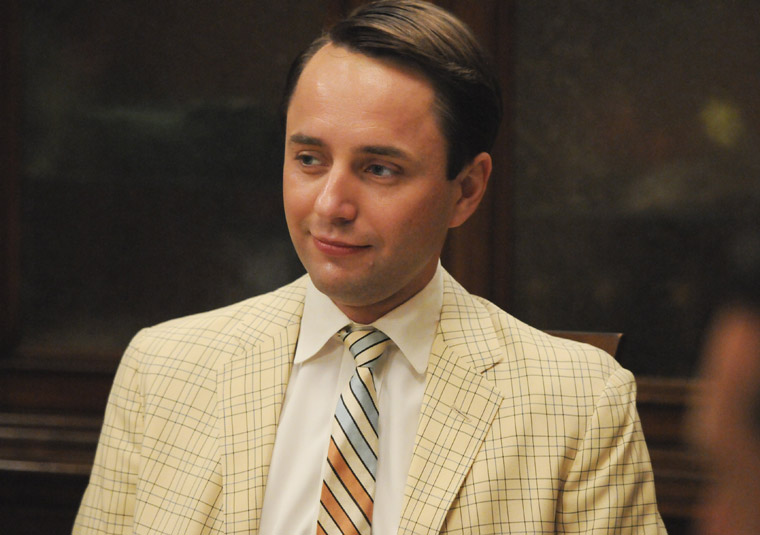 Themes of emasculation were strong in this week’s installment of Mad Men, with fights, competition, and insecurity abounding between the show’s men. Women were curiously in power throughout the episode, in contrast with previous episodes (especially last week’s “Mystery Date,” which vibrated with violence against women).

Megan’s continuing understanding of Don and how to influence him, Trudy’s persistent harping on Don, Joan’s rediscovered power and independence in the office, Peggy’s savvy with Ken–all the show’s women experienced a bit of power in this episode.

Empowerment was visible not only in their demeanors but also in their wardrobes–often, the women were dressed to look harmonious with their surroundings, a technique that costumer Janie Bryant has been known to use to indicate the relationships among characters. In the office, Joan and Peggy’s outfits’ color schemes pick up and echo the turquoise and gold tones of the SCDP offices. At the Campbell house, Trudy, Megan, and Ken’s new wife Cynthia are all dressed in warm colors that mirror the home’s interior.

Of course, attention is paid to the individual women’s styles, with Megan dressed in the latest groovy fashions, Cynthia in a sprightly yellow shift, and Trudy in a slightly out-of-style but cheerful early 60s floral with a full skirt. These women fit in where they are and hold the power in their positions, whether that is in the office or at home.

The men, however, were subject to all manner of humiliation and emasculation, chief among them Pete Campbell, who experienced these feelings not only professionally, but also socially and within his own family. He is incompetent at home (for example, Don’s Superman-like fixing of the kitchen sink while Pete fumbles for unfamiliar tools), floundering in the office (even culminating in an intensely satisfying exchange of blows in the conference room with Lane Pryce), and only successful at seducing a prostitute, rather than the teen beauty he obsesses over. He is far from the young, snarky ad rookie we met in Season 1 in his narrow blue suits and lightness of foot. Pete Campbell is visibly aged, his hairline thinning and his waist expanding. He is costumed fashionably (Pete has always had style) but his clothes are unflattering and not very masculine; we see him wearing pastels and clashing colors in sloppy, loose fits.

The other men (Don, Ken, Roger, Lane) all experienced some cutting down. Don, unbelievably the happiest person on the show now, is cut down to size by his new wife who understands him better than Betty ever could–a fact that was not Betty’s fault, per se–but Don grows from it, maintaining his potency and passing on his new self-knowledge to Pete, who seems to be attempting a Don-like existence. Don is dressed attractively and in the now quite popular plaid sport jackets, but we see his real power when he whips his shirt off and fixes the sink in his white tee, recalling when Francine and Betty used to watch him fix up the house and sigh, “that man.”

Ken Cosgrove’s ambitions of becoming a great writer are cut down by Roger and Pete when he reveals that they sometimes interfere with his work, to which he responds by not-so-subtly painting an invective-filled picture of the two in the final moments of the episode. He is dressed, like each of the men in the episode, to clash with his surroundings in a brilliant blue plaid. Lane experiences disappointment when his foray into accounts fails because of Pete’s indiscretion (“there was chewing gum on his pubics!” remains one of the funniest lines the show’s ever had), but quickly regains his power when he beats the stuffing out of Pete Campbell, giving the audience a moment for which they have waited for five seasons. This triumph, however, is again diminished when Joan quietly shoots him down. Lane’s stuffy British tweeds and touches of red in this episode highlight how out-of-place he is in this area of the SCDP work environment (all modern sleekness and blue tones). Lane retains his dignity, but experiences disappointment and emasculation the same as the rest of the men.

Not much has been done in this episode to advance the plot of the show, but it has accomplished a summing-up of many of the themes of the season. As the wide-eyed teen beauty of Pete’s dreams says, “Time feels like it’s speeding up.” This is very true of New York in the 60s, which declined rapidly from shining metropolis to filthy crime capital in the span of a few years–a process we are already seeing in the increase of violence and depravity discussed.

The idea of “every man for himself” is also being explored, with Pete’s betrayal, Peggy’s surprising alignment with Ken, and Roger’s marked departure from the activities of the company displaying themselves all too clearly. At a time when SCDP desperately needs cohesion, each character is focusing in on themselves. This episode gave us a clear view of where each character stands–or perhaps more appropriately, where they should stand, and the consequences of when they step outside of those lines.