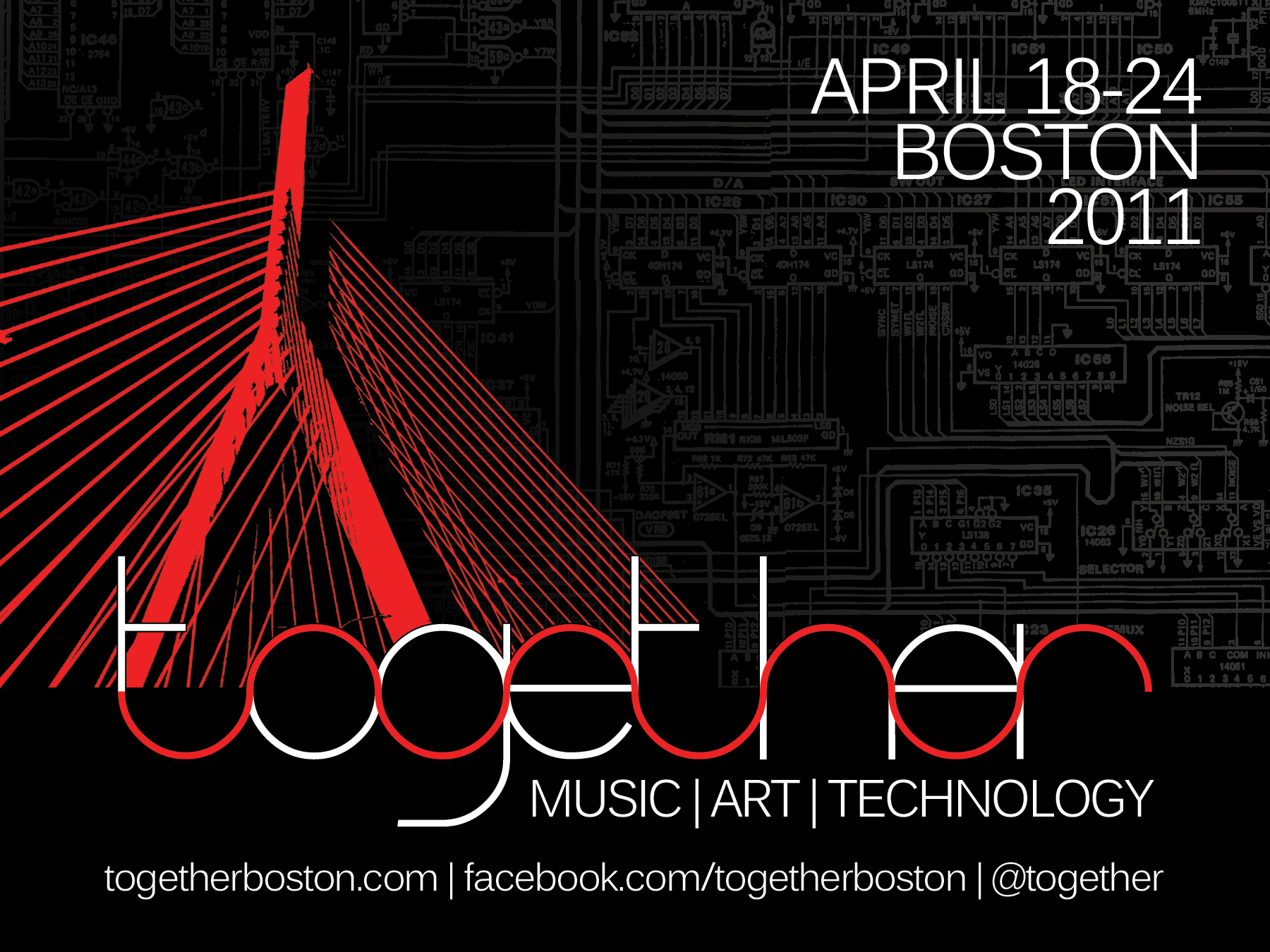 The Together Festival, Boston’s annual weeklong electronic music event, is back this April 18 through the 25. This year’s diverse lineup includes the likes of BBC Radio 1’s Mary Anne Hobbs, DJ Switch of Major Lazer and local producers Hot Pink Delorean and Nooka Jones, among other acts. Danish producer Trentemøller will headline the festival’s closing party on April 25, extending Together one day past its original April 24 end date.

Founded in 2009, Together is unique from other electronic festivals like New York’s Electric Zoo Festival and the renowned Electric Daisy Carnival in Los Angeles because of its its inclusion of demos, panel discussions, demonstrations, and film screenings. These events, as well as others in the daytime, take place in collaboration with Boston-based companies like Boston Cyberarts and Harmonix as well as Northeastern University and Massachusetts College of Art and Design.

“Together is a time where Boston tries to pull out all the stops. It’s a great time to showcase and expose all the talent this city has locally, while also recognizing there are plenty of partygoers out there,” said Jones, who will be performing at the Enormous Room in Cambridge on April 20. “There’s something good every night of the week, and representing many different genres. It’s a true inspiration for the city.”

With over 80 events spanning the week, it can be hard to choose which ones not to miss. Check out this guide, compiled with the help of Together’s top-picks (*), courtesy of Together, and Jones’s personal must-sees (†).

Pantha du Prince*
Performing with The Sight Below and B-Tracks at The Great Scott in Allston, 9:00 p.m.
Hailing from Germany, Pantha du Prince focuses on minimal techno and club mixes to start off the festival with a bang.

Ramadanman
Performing with DJG, Bassic, Moldy and Damian Silva at Goodlife in Boston, 9:00 p.m.
An up-and-coming dubstep producer, David Kennedy aka Ramadanman’s forward-thinking take on the genre brings fresh perspective to his sound.

Nooka Jones
Performing with Christopher Wade at the Enormous Room in Cambridge, 9:00 p.m.
A Quad favorite, Boston University graduate Nooka Jones returns to his home turf. Influenced by genres from dubstep to ambient, his dynamic mixes always bring something fresh to the dancefloor.

Maya Jane Coles†
Performing with DLUX and Volvox at Middlesex Lounge in Cambridge, 9:00 p.m.
“I’ve been following [her] for about a year now, and she’s both making and playing very interesting, forward-thinking tech-house” said Jones. The 23-year-old is one of the most notable up-and-comers to watch at this year’s Together.

Switch
Performing at Rise in Boston, 1:30 am
A Pioneer in the fidget house genre, Switch rose to popularity in his collaboration with fellow electronic producer Diplo under the name Major Lazer. He has also worked with a diverse range of artists, from M.I.A. to Christina Aguilera.

The Get Together*
Massachusetts College of Art and Design’s Pozen Center, 12:00 p.m.
Together’s signature daytime event brings a six-hour expo featuring art, fashion and music. The free event is in collaboration with the Boston Cyberarts Festival and works to foster the exchange of culture and information among festival-goers and representatives from the professional field.

Mary Anne Hobbs
Performing with Lorn, Mike Slott, Steppo, C Dubs, Blue Boy Productions and Professorpious at the Paradise Rock Club in Boston, 7:00 p.m.
Former BBC Radio 1 DJ and dubstep pioneer, legend Mary Anne Hobbs shows off her rich background in electronic music in her diverse mixes. She is known for her collaborations with dubstep producers world-wide, like Netsky and Kode9. Definitely the one event not to miss in this year’s Together lineup.

Trentemøller
Performing with Dorit Chrysler at Royale Boston, 7:00 p.m.
Danish producer Trentemøller might be best known for his remixes of fellow European electronic artists like Röyksopp, but his original productions bring a realm of experimentation: a little ambient, house-y and sometimes a bit minimalistic, that you have to hear to understand.

For more information about the Together Festival and a complete schedule of events, visit www.togetherboston.com.