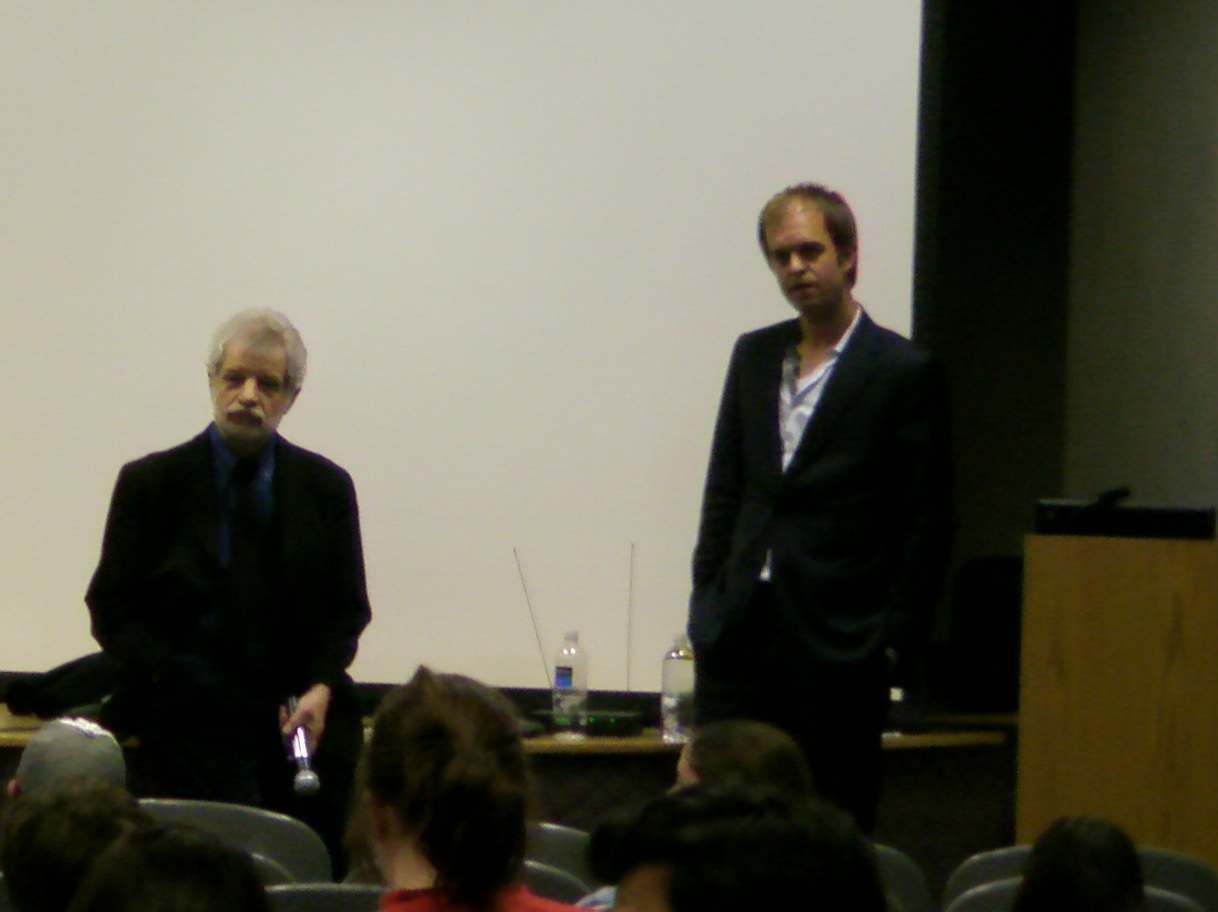 World-renowned film theorist and historian Thomas Elsaesser came to Boston University’s College of Communication to give a talk about the current state of film theory. Malte Hagener, his colleague and co-author of their book, Film Theory: An Introduction Through the Senses was also present to speak to the large group of BU students. The presentation was part of COM’s semester-long Cinematheque series.

Elsaesser, who is currently teaching at Yale University and Hagener, who is an associate professor at Lüneburg University in Germany, are on a tour of the East coast, speaking at various universities about their new book called Film theory: An introduction Through the Senses. The evening started off with a short introduction by Professors Paul Schneider and Roy Grundmann, after which Elsaesser began his presentation by telling the audience a bit about his book.

“In the early 2000s, I was asked by a small German publishing house to write an introduction to film theory for the still relatively new field of film studies in German universities,” Elsaesser said. “I asked my former PhD student, Malte Hagener, if he wanted to be my co-author. Every two weeks during my semester at Yale, I would send Malte my lecture notes with further suggestions and he regularly came up with first drafts. This went back and forth until the summer, where we had the manuscript more or less finished. In October of the same year, the book was in the stores.”

“So what is new or different about our approach to film theory?” Elsaesser asks. “When I was planning my Yale course, I looked at a number of standard works and assigned them to my students. I soon realized that my students were having a very hard time getting interested in the topic because they were immersed in the digital world of YouTube and DVDs, used to special effects and blockbuster movies.”

He said that traditional film theory seemed remote and irrelevant for most of his students. “I didn’t want to use the classical division into realist theories on the one hand and formalist on the other. At the same time I did want to cover all the main theories and mention the main theorists. I wanted a much simpler overall organization. This is when I hit on the idea of using the body and the senses as my main reference point, to make the spectator’s body and its relation to the film experience the test case.”

Indeed, each chapter of Elsaesser and Hagener’s book deals with a different bodily sense. Each major film theory is explored through sections such as:  “Cinema as window and frame”, “Cinema as door – screen and threshold”, “Cinema as eye – look and gaze” and “Cinema as skin and touch.”

Elsaesser used several clips throughout his presentation to illustrate his point. He played Matthias Mueller’s avant-garde compilation film Home Stories, a collage of a series of Hollywood melodramas of the 1950s and 1960s in order to demonstrate his book’s idiosyncratic intellectual design. He instructed us to pay attention to “the structuring role that windows and doors play in the emotional architecture and the dramatic arch of the narrative.” He also played a compilation clip from one of his Yale students called Doors and Screens in Imitation of Life and Skin and another clip entitled Touch from Ingmar Bergman to further illustrate the content of his book.

Malte Hagener took over and spoke during the second half of the evening. He discussed contemporary cinema and the increasing use of computers and virtual reality. He called his presentation “Second Life,” in honor of the second life that cinema seems to be undergoing as well as the second life we live temporarily when we go to movie theaters.

Hagener primarily focused on the works of Pixar because “animation is the default of film since all modern films use some computer enhancement.” He used Toy Story, Wall.e, and Monsters Inc as examples to highlight how contemporary cinema is refiguring and changing our body and senses, and how technology has changed our movie-viewing experience. “Images such as [those in animated films] raise doubts about realism…at the same time, the film also plays with the notion of make-belief when it asks us to take the image seriously.”

He ended the evening with something for the audience to think about in regards to technologically enhanced films today. “It is not a world coming out of a window, it’s a window into a world. We want the screen to disappear, philosophically speaking. In this perspective, it is the frame giving way to the door and then the abyss, where one is sucked into the 3D movie. Even though one might disagree with this statement, as long as these metaphors and concepts keep on being used, it makes sense to think about them in new and productive ways.”

Ruth Chan (COM '14) is just your average moviegoer. Fortunately, she got a gig here at The Quad and is now lucky enough to write reviews for them. Shoot her a message if you ever want to discuss the geeky world of films with someone.

View all posts by Ruth Chan →