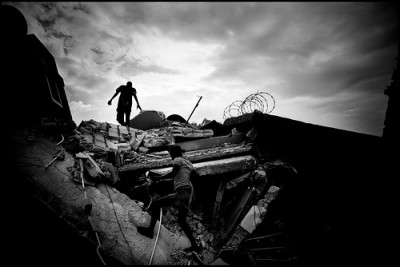 On January 12, 2010, a 7.0 magnitude Earthquake struck the city of Port-Au-Prince, Haiti. Over fifty aftershocks followed in the next few weeks. Hundreds of thousands were killed and countless more, injured. Entire buildings were leveled, and the infrastructure of the country effectively collapsed.

Of course, that’s common knowledge now. Humanitarian efforts were large-scale and the international response was admirable. But as time has passed, and other issues have come to the forefront; and while interest in Haiti has not deteriorated completely, the country is still broken and there is still work to be done.

That was the message of Partners in Health’s recent event, “Remember, Reflect, Respond: Haiti One Year Later.”  The Boston-based organization has had a long-standing relationship with the country of Haiti, and has for the past two decades brought help to its people in the form of medical facilities, equipment and education. Since the quake PIH has worked tirelessly in relief efforts, raising over $97 million.

Boston University has shown its support, as well. Last year, BU hosted “Boston Stands with Haiti” in collaboration with PIH and many other on-campus student groups. The event exceeded expectations, raising over twice its monetary goal.

But according to a report published after PIH’s conference, “a year after the earthquake, more than a million displaced people are still living in spontaneous settlements.” The conditions in these settlements are poor, and prone to outbreaks of cholera and water-borne illnesses.

The camps are also difficult to maintain, and the law is difficult to enforce. Violence, particularly sexual assault, often goes unchecked. Last month, BU’s chapters of Amnesty International and the Haitian Cultural Association partnered to hold an event “Haiti: One Year Later” to spread awareness for the issue of rape within the camps. According to a presentation at the event, 250 rapes were reported in the 150 days after the earthquake. This does not account for all of the rapes that went unreported. The true statistics are unknowable.

The presentation also commented on the poor state of the country’s infrastructure. 97,000 homes were destroyed, and 188,000 structures in total collapsed. This includes many government buildings, the presidential palace and many health facilities.  The PIH report agreed. “Disaster relief is not reconstruction. ‘Building Haiti back better’ means sustaining those temporary gains and adding education, health care, services, and good governance,” it said. The report goes on to argue specific steps that the organization will take.

How students can continue to help is less clear. Katlyne Demosthene (CAS 2013) the Vice President of the HCA, talked to the Quad on the subject. “I feel like this year, a lot of people… it’s hard to say that people forgot. But I feel like that’s the thing to because, as the months and years go by a lot of people forget the situation that Haiti is in. It’s not a typical ‘just go-in, help people’ thing. It’s a long-term situation. ”

Recently, efforts by the HCA have had less to do with raising money and more to do with spreading awareness. According to Demosthene, “Haiti: One Year Later” was a success, and the group has been discussing in meetings more ways to get the student body involved. “We’ve been… trying to collaborate with as many outside organization as possible, the many diverse groups that BU has. The collaboration with Amnesty International is the first collaboration we’ve had with another organization outside of the African community. If we do something like that to spread the word out more, it will get peoples attention.”

One of the most obvious ways to help is through donating money. Partners in Health is still accepting donations. Charity : Water, a nonprofit that brings drinkable, clean water to developing nations, is currently doing work in Haiti. The American Red Cross is still helping, and has published its own one-year report on the country’s situation. There are countless other organizations that are still working in Haiti, as well.

There are also Boston-based connections to Haiti: “A lot of the local hostpicals work with Haitian hospitals down there. Brigham and Womens has a program down there… for the BU Community, I feel that there’s many avenues to take,” Demosthene said. If you try to have that interest that you had last year, you can always find somewhere to help.”