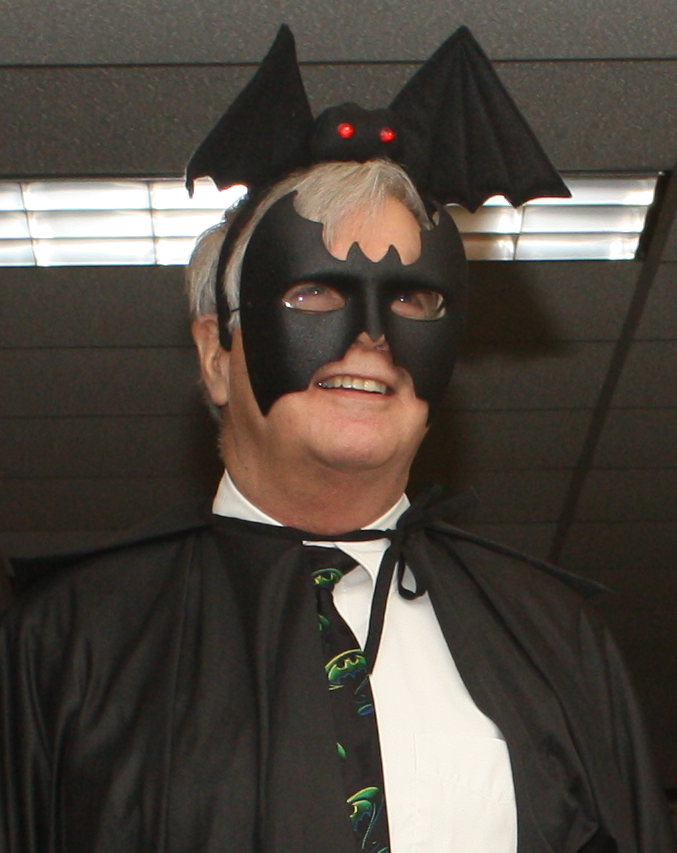 By Caitlin Clancy and Becca Tarvin

On the first day of Mammalian Ecology, Professor Thomas Kunz walked into the room holding a bone larger than his forearm. “Do you know what bone this is?” he asked us. It was a walrus baculum, the bone located inside the penis of a walrus. Most of us were unaware that any type of mammal had such a bone, but apparently it’s rather common: bats, raccoons, squirrels, and whales all have bacula.  As weeks went by, we learned many things about mammals (did you know that whales are closely related to hoofed mammals?), but perhaps we learned the most about bats, since Dr. Kunz integrated them into almost every topic of BI512.

It’s no joke that we’re referring to Dr. Kunz as the “Batman” of BU, since that’s exactly what he has been since he assumed his professorship in 1971. Searching his name in the Web of Science reveals over 300 papers that he has authored or coauthored; this just illustrates how prevalent his work is in the field of bat ecology.

We spoke to Dr. Kunz in his office in an attempt to uncover some of this Batman’s secrets.

Dr. Kunz grew up in Missouri, where he spent much of his childhood playing sports at school and at home, while simultaneously nurturing his interests as a biologist. He attributes his initial interest in biology to his fifth-grade teacher, who shared her passion for silkworms with him and the rest of his class. Later in his life while attending Central Missouri State College, Dr. Kunz discovered his affinity for caving, which eventually led to his overarching interest in bats. After graduating from college in 1961 and obtaining a Masters degree in Education the following year, Dr. Kunz began teaching at a new high school in Kansas and enhancing his education during the summers through the National Science Foundation Summer Institute in Biology. By 1968, he had obtained a Masters degree in Biology from the National Science Foundation Institute at Drake, Iowa, and that same year he entered into a Ph.D. program in Systematics and Ecology at the University of Kansas, where he received his degree in 1971 (Kunz, 2005). During these years, Dr. Kunz’s research interests evolved from ecological studies on bats in Nebraska and Iowa to research on the roosting, reproductive and feeding ecology of the cave bat (Myotis velifer) for his Ph.D. dissertation.

Since joining the faculty at BU in 1971, Dr. Kunz’s research has focused on the physiology, roosting and foraging behavior in various species of bats. One of his most notable contributions to science is the founding of a new discipline known as “aeroecology”, which combines the disciplines of ecology, atmospheric science, computational biology, engineering and geography (Kunz et al., 2008; Hristov et al., 2008).  This unique concept examines the aerosphere, a substratum of the troposphere nearest to Earth, and its role in supporting life for numerous airborne organisms. Until aeroecology’s introduction, little collaboration had been invested in integrating the scientific goals of these different disciplines and utilizing the tools of each to address issues of the aerosphere and its impact on the organisms that use it. Although no organism spends its entire life in the aerosphere, many spend a large portion of it there, and as such it has conferred many selective adaptations on the anatomy and sensory modalities of flight. Furthermore, fluctuations in the aerosphere, whether subtle or sudden, have immediate impacts on those using it, as well as downstream effects on terrestrial and aquatic organisms.

Dr. Kunz has pioneered the application of various modeling and tracking techniques traditionally used by computer scientists, engineers, and the military to explore and model the aerosphere and its “users.” Weather surveillance radar (Doppler) and thermal infrared imaging have been employed in his research to noninvasively track and visualize the daily and seasonal activities of airborne fauna, particularly bats (Horn and Kunz, 2008). Additional developments in data collection are underway, including aircraft-based radiotelemetry and thermal imaging paired with LIDAR (Light Detection And Ranging), ultrasonic acoustic detectors, and/or vertical profiling radar.

These methods permit researchers to further investigate foraging and dispersal behavior and census populations. An important realization of this work is monitoring how natural and anthropogenic factors have tremendous effects on the organisms using the aerosphere. His work is enormously helpful in better understanding flying organisms, as well as in his efforts to ensure that environmentally sustainable energy projects such as wind turbines are constructed to optimize benefits to humans, but also minimize detrimental impacts on airborne animals (for an overview of the effects of wind turbines on bats, see Kunz et al., 2007). Moreover, these efforts provide greater insight on atmospheric dynamics, climate change, and other environmental conditions.

Dr. Kunz remains on the forefront of all aspects regarding bat evolution, behavior, ecology, and conservation. His services to the university as an educator and the scientific community as a researcher are invaluable. If you have an opportunity to take a class with Dr. Kunz, do so! They come complete with mammal bacula, bat costumes, taxidermy, and a very cool weekend field trip to BU’s Sargent Center in New Hampshire.

Special thanks to Dr. Tom Kunz and Morgan Nabhan for all their contributions!

View all posts by Becca Tarvin →