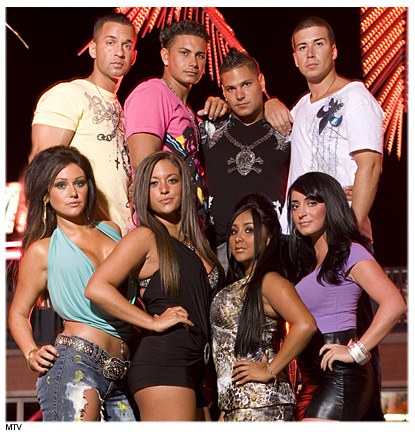 Over the past few months America, especially the East Coast, has given the rest of the world a new reason to believe that we are a population of uneducated meatheads with loose moral standards and an unnatural obsession with hair product (as if we hadn’t been through enough already). Ladies and Gentlemen, I give you: The Guidos. Thanks, “Jersey Shore.”

Although Guido originated in the United States as a derogatory term for the fairly numerous and at the time unwelcome Italian immigrants, it is now being embraced by a select group as part of their modern identity. According to David Tricario, a sociology professor at CUNY Queensborough, the term Guido is in fact, “a slur, but Italian kids have embraced it just as black kids have embraced the N-word. In the same way that radical gays call themselves queer.” Professor Tricario goes on to explain that the rise of the Guido subculture stemmed from the 1970s work of film star John Travolta and his roles in”Saturday Night Fever,” “Welcome Back Kotter,” and “Grease.” The Americans that now proudly refer to themselves a Guidos, or the feminine Guidettes, are young people of Italian heritage that tend to embrace the more manufactured side of life. Everything about these people is fake: hair, breasts and skin tone, to name a few. The Guido music of choice is often produced on a MacBook rather than an actual instrument and their style of dance only employs one very specific appendage (the fist; get your mind out of the gutter). It is also apparent that real first names are of meager significance among this group, as people are referred to by nonsensical nicknames: “The Situation,” for example, and my personal favorite, JWOWW.

Adding insult to injury, MTV, a once revolutionary musical television station, is guilty of creating this newfound global Guido-mania. The network is actually paying young members of this “cultural movement,” to take on the title of Guido and embrace it by promoting a lifestyle full of excessive alcohol intake, gravity-defying hair, and melanoma-inducing daily trips to the tanning salon. This image is just as forward-thinking as the popularly projected images of African American rappers carrying handguns and referring to women as, “bitches” and “hoes”; it turns the personal practices of some into stereotypes, and it should no longer be exploited for purposes of entertainment.

College students, including those attending Boston University, are embracing these disrespectful images of Italian Americans by throwing “Jersey Shore” themed parties complete with excessive use of bronzer and the occasional employment of a Bump-it. Arguments may be made that these parties are all in good fun; however, what few people realize is that dressing up like a Guido for entertainment is a basic, however less directly cruel, equivalent to a Vaudeville performer appearing in blackface and acting as a buffoon.

As Caryn Brooks of Time Magazine points out in her article, “Italian Americans and the G Word: Embrace or Reject,” MTV has had its fair share of controversy surrounding the use of the term Guido while promoting “Jersey Shore.” Dominos, the collegiate favorite pizza-by-delivery company, pulled its ads from the show after the term Guido appeared in promotions for it. MTV quickly changed the word to “roommates” in the commercial but still stood by the term Guido, stating that they would not deter the “roommates” from referring to themselves that way. Brooks highlights the ignorance of the cast members embracing this term by juxtaposing the opinion of “The Situation” with the opinion of Andre DiMino, president of the national Italian-American service organization. While “The Situation,” believes that the term Guido refers to a, “good looking Italian guy,” DiMino sees the term as, “‘a derogatory comment,’” explaining, “‘It’s a pejorative word to depict an uncool Italian who tries to act cool.'”

While some are offended by the show’s blatant use of the term Guido, others stand by the term and defend its history, arguing that the term in empowering rather than prejudiced. Irin Carmon, blogger for the popular site Jezebel.com posted a pro-Guido argument entitled, “Jersey Shore: On Beauty and Not Even Looking Italian.” This post was reposted by popular blog”Sociological Images” due to its rare albeit insightful take on the new found popularity of the term. Carmon argues that the term Guido is not pejorative at all, stating that it was developed by Italian Americans in order to define their own standard of beauty in a time when Marcia Brady was considered perfection. Carmon cites recent panel discussion held at Queens College as her evidence using arguments given by New York State Senator Diane Savino to prove the term Guido’s positive inflection. Savino points to “Saturday Night Fever” as a positive turning point for Guido culture, stating, “‘It changed the image for all of us,’” and referencing John Travolta’s white suit and slicked back hair as, “‘a way we [Italian Americans] could develop our own standard of beauty,’”(Carmon, 2010).

So does the term Guido perpetuate disrespect and prejudice, or reclaim a racially-charged word and empower its people?  At first, it seems that the self-proclaimed Guidos are following in suit of some African Americans’ practice of referring to one another by a certain term beginning with an “N”; however, the parallel isn’t so perfect in the year 2010. For example, “Italian American” is not even recognized as a category of race (though it has been in the past, as by eugenicists like Charles Davenport before WWII), and to claim that Italian Americans experience the same type of institutionalized racism as African Americans would be difficult (not to mention ridiculous and offensive). So why reintroduce Guido, a term soaked in outdated hatred and segregation, to supposedly honor an individual culture?

While some have embraced the image that goes along with the term Guido as culturally liberating, it is important that we focus on the fact that this image liberated Italian Americans when they were an unaccepted minority in the 1970s. Today, in 2010, we must remember that the term Guido is associated with an arguably irrelevant racial stereotype; it can be considered offensive to those who experienced racism or just create a new stereotype for those who don’t remember the old prejudices. In this day and age, Italian Americans are a well-integrated and even highly celebrated part of American society and are not in need of the negative publicity stemming from the alcohol-fueled antics of the “Jersey Shore” cast members.

Despite the recent confession that JWOWW and Snooki of “Jersey Shore” are not actually of Italian descent, the show, the negative image it projects, and the term Guido will not cease to be associated with Italian American culture until we as Americans stop supporting it; and maybe then we can focus on eradicating existing racial stereotypes instead of creating new ones.

Sarah Cox (CAS '11) writes "Socially Yours," a social manners column, for the Quad. She was born and raised in Brooklyn, New York and is now living full time in Boston. She is studying Art History and hopes to stay on for her masters. One of her goals in life is to one day own a penguin. She would also like to stop dropping the F bomb so much -- class it up a little bit.

View all posts by Sarah Cox →